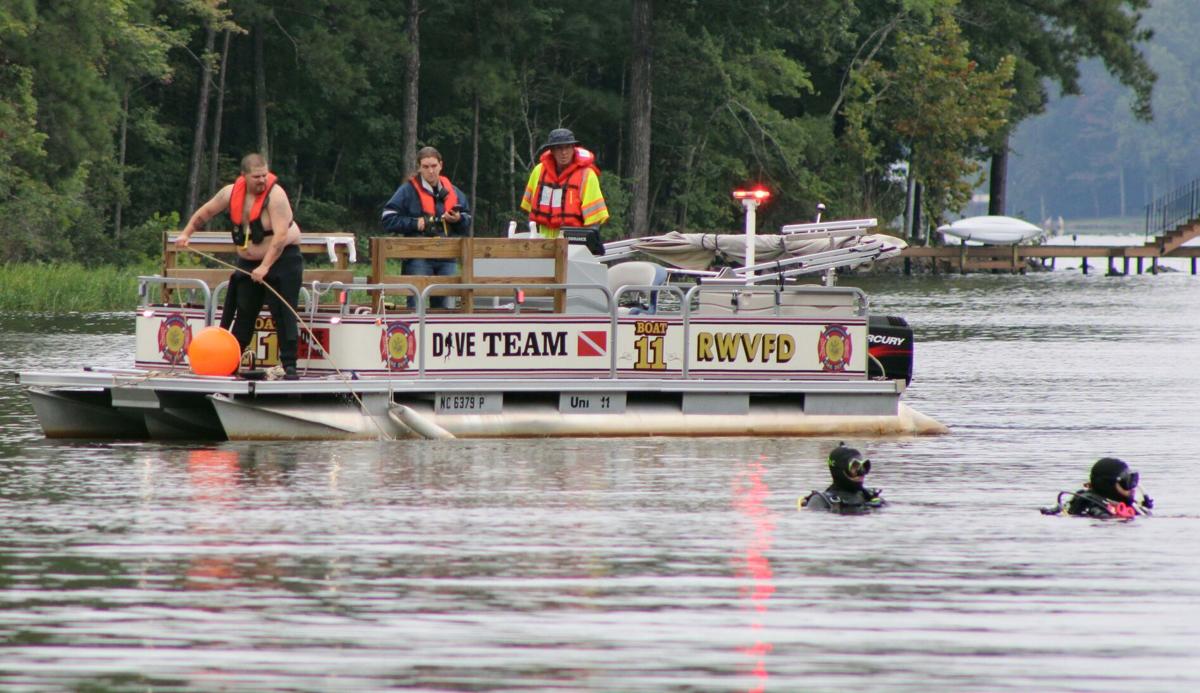 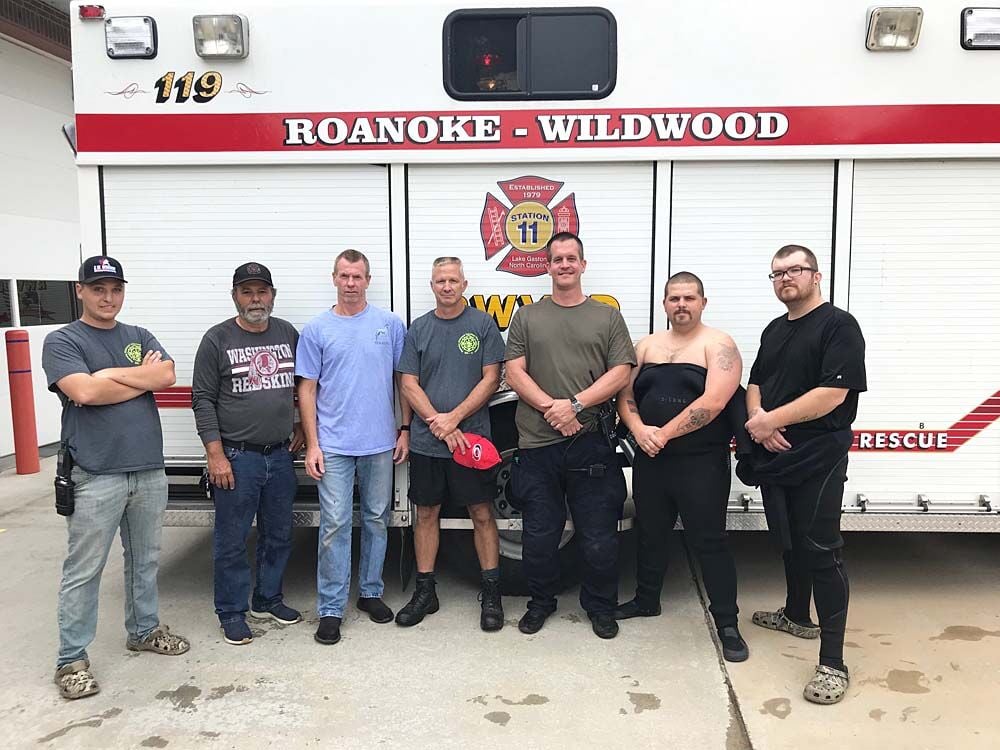 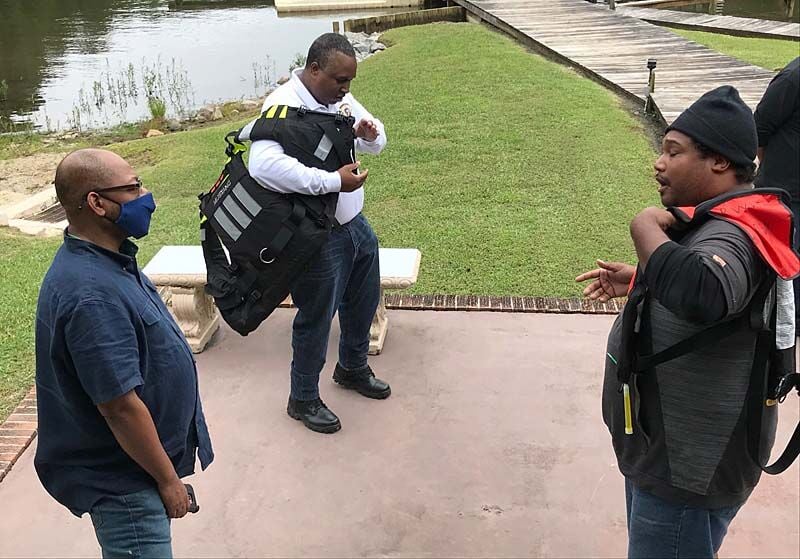 Tattoos don’t always tell a story. But Roanoke-Wildwood Volunteer Fire Department Deputy Chief Joshua Compton having six fire service-related ones ought to tell you something.

One of the tattoos on Compton’s leg helps explain the mentality of the divers that participated in Roanoke-Wildwood’s training last weekend in the cove at Spinnaker Pointe, off Lizard Creek Road.

Part of Compton’s tattoo reads, “Under water, I live; on land, I survive.”

“I hold them very dear to my heart,” Compton said of his ink, much of which is spread around his chest and arms, “because this is pretty much what I wanted my career to be my entire life.”

Compton hasn’t arrived there just yet professionally, but that’s not pertinent to his commitment to firefighting on the volunteer side.

Roanoke-Wildwood’s water rescue/recovery training held Sept. 25-26, led by Chief Lorenzo Wilkins, gave the department a chance not only to fine-tune their craft but to showcase their abilities to the other local agencies they work alongside during emergencies.

Warren County’s emergency services and EMS departments as well as the sheriff’s department each were represented during the annual training that featured water rescue exercises on Friday night and recovery practice the following Saturday.

The dive team is especially important to Roanoke-Wildwood, which started the program, in part, according to Compton, to recover people in a more delicate and respectful manner than alternative methods.

The entire aspect of diving brings forth an essential dichotomy for Compton, who feels at peace under the water, but must channel a different energy when stakes are high.

“When we have to look, say, for a body, or something like that,” Compton said, “you’re in a whole different mindset. The mindset you’re in for that is you want to bring closure to the family.”

“Hopefully get the family on the journey to finding peace and closure,” added Roanoke-Wildwood dive team captain Brandon Hodges.

Hodges is a Newport News, Va. native and still lives across the James River from there in Smithfield, Va., but also has a place on Lake Gaston. He joined Roanoke-Wildwood because he lost his brother at Lake Gaston 15 years ago.

“This team and this unit and this department helped find him,” Hodges said. “...I just wanted to give back to the community and give another individual, hopefully, the chance to survive.”

Hodges represents something else that makes Roanoke-Wildwood a unique department: Their members hail from many different locales. Compton, of Macon, reckons he’s the only diver actually native to Warren County.

“Roanoke-Wildwood is a good department because we get people from all over that want to join,” Compton said. “When they move down here, they want to join up. They can see we have a dive team or a water rescue team and they’re like, ‘Well, how can I join that? I want to be part of that.’”

Being “part of that” unfortunately means dealing with the loss of life. When the dive team is called, it’s usually in times of tragedy, though they are also known to recover all sorts of other items ranging from wedding bands to sunglasses - Those acts of community service offer a good training ground, much as the cove of Spinnaker Pointe did.

Wilkins and company devised four separate specific scenarios for the training. On Friday, one scenario included rescuing a pair of kayakers who had flipped over in their vessel. Next, it was a man overboard a pontoon boat.

The following day, the scenarios included recovering both a drowning victim and a weapon involved in a crime.

Situations like these require synchronous, inter-agency organization. They are relatively rare but they do happen.

“They are valuable with this equipment and stuff that they’ve been able to develop over the years since I’ve worked with them,” Warren County Emergency Management Coordinator Dennis Paschall said of Roanoke-Wildwood. “It is a valuable resource to have. They’re also a source where (Wilkins) is readily available if he’s needed somewhere else in the state; he does mutual aid for other counties also and he lets me know if he’s deployed to other counties so if I do have another incident in the county, I need to be considering another resource.

“It takes planning. It takes a lot of collaboration between me and the fire departments, and the different resources.”

The sheriff’s department is another one of those resources. As in the fourth scenario executed in training, a volunteer fire department like Roanoke-Wildwood could become valuable in solving a crime.

“Often when we have a person missing, there’s water involved,” Major John Branche of the Warren County Sheriff’s Department said. “We’re the first persons to get the report. Then we look to get units out here. Just to know what they do, who is involved, how effective this is. Because when we get the calls, we have to figure out where we’re going to get these resources from.”

Hodges emphasized that diving at Roanoke-Wildwood is earned; you must first prove yourself on the fire side of operations. After all, the department may get about one dive emergency per year or a few per year counting mutual aid.

Water rescues are much more prevalent and clearly, that’s a good thing.

“We don't have ideal situations when it comes to emergencies,” Wilkins said. “The pager can go off anytime, anywhere, in any condition.”

Wilkins said his divers don’t usually come to him with any experience, but they receive training throughout the year and become Professional Association of Diving Instructors-certified.

The conditions under water can be as unideal as they come as it relates to visibility. The divers call it “black water” and must use nonverbal communication methods such as squeezing each other’s hands.

The Spinnaker Pointe waters ranged in depth from 10-30 feet.

“If you sit here and you close your eyes, that’s what you see,” Compton said. “You’ve got no visibility in the lake water whatsoever, so you’re pretty much in contact with your buddy and ya’ll are feeling (around) and if you do get a little bit of visibility, you’re lucky to get 2 to 5 feet if that. It’s a whole ‘nother experience.”

Or a “whole new world,” as Hodges began to see it after many years of prior experience on top of the water participating in recreational activities.

Another one of Compton’s tattoos is a Bible verse that reads, “Greater love hath no man than this, that a man lay down his life for his friends.”

And that’s really what successful emergency operations boil down to: teamwork.

“It’s about the capacity of putting trust in a brother,” Hodges said. “Knowing I can trust him with my life and that he would trust me with his life.”