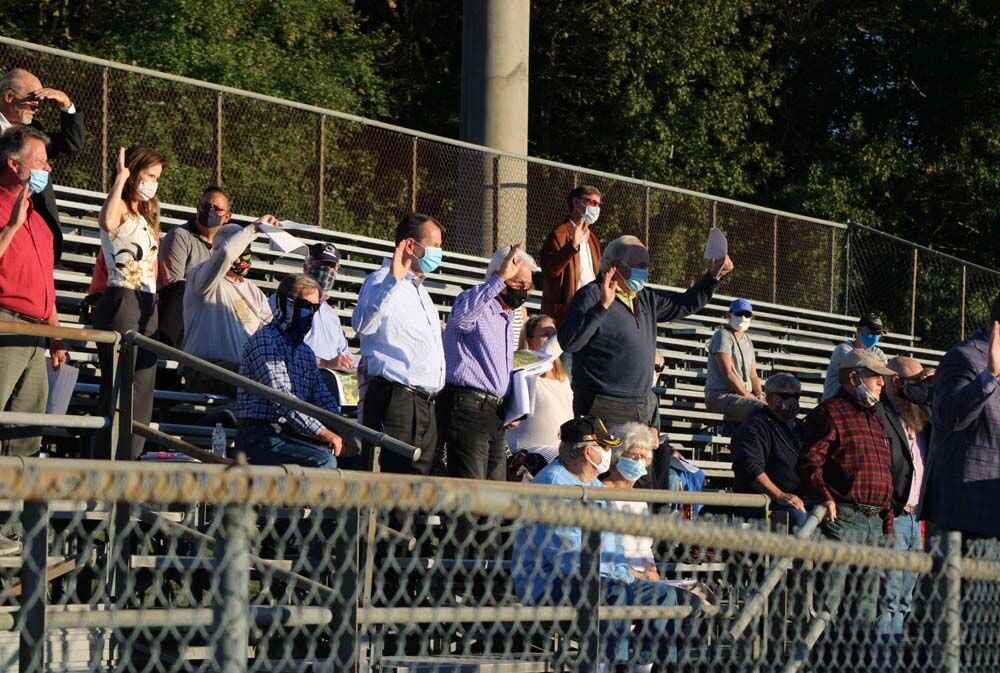 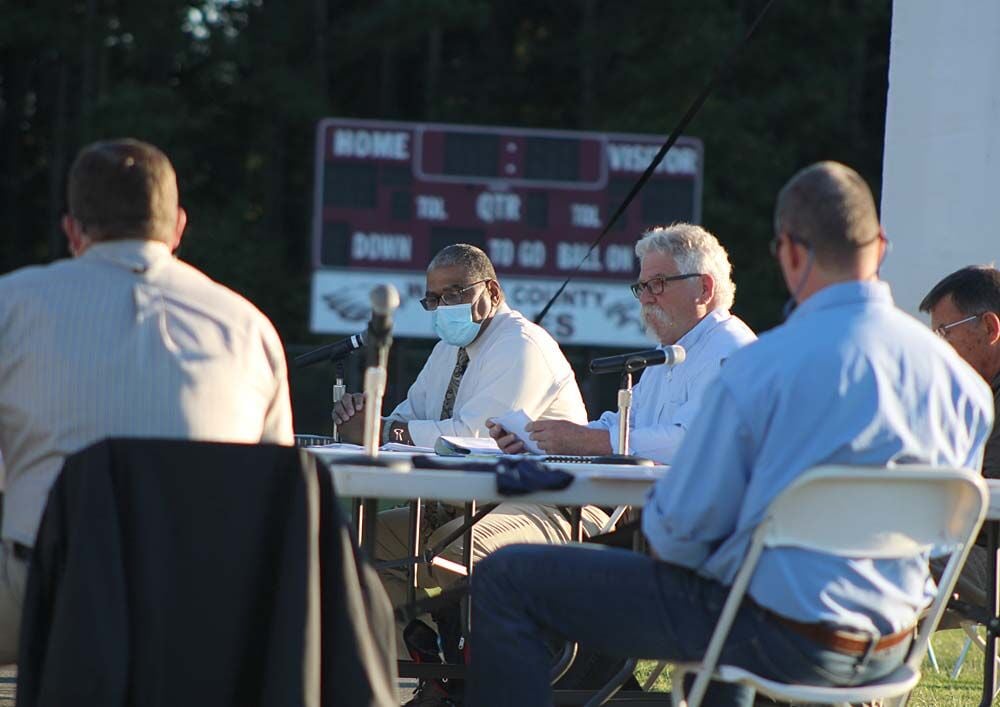 The Warren County Board of Adjustment met Wednesday, Sept. 30 at the Warren County High School football stadium to consider applications from the Chateau on the Lake hotel project.

The Warren County Board of Adjustment met Wednesday, Sept. 30 at the Warren County High School football stadium to consider applications from the Chateau on the Lake hotel project.

David Neill, an attorney representing Eaton’s Ferry Estates residents, set the tone for the remainder of the Warren County Board of Adjustment meeting Wednesday, Sept. 30 about 14 minutes into Chateau on the Lake developer Robert Schaar’s opening comments.

Schaar, who had just started to discuss the potential financial impact of the proposed Lake Gaston hotel project, was met by an objection from Neill, who was seated in the Warren County High School football stadium bleachers behind Schaar, who was speaking at a podium between the crowd and the board.

To that point, Neill hadn’t been introduced in the quasi-judicial meeting to consider two applications: one for a variance request and one for a conditional use permit.

Neill, of Fox Rothschild Attorneys at Law, stood up and said, “Objection. This is a variance hearing. It’s not a developer’s dream hearing. It may be a wonderful vision but it has nothing to do with finding the facts...”

The board sustained the objection and ultimately found the facts weren’t on Schaar’s side for the variance request, voting 3-1 to deny it, while granting a continuance for the conditional use permit hearing, currently scheduled for Monday, Oct. 26 at the Warren County Armory Civic Center.

Board members Julia Torain, Robert Kelly and Glenn Forsythe voted against the variance request and Greg Cox for it. Randall Robinson and Joseph Zeno were recused from the meeting to avoid a potential impartiality conflict.

“They decided to hear the variance first, hear the witnesses, go through the whole process and then based upon the evidence, Mr. Schaar did not provide substantial evidence to justify the variance,” Warren County Planning and Zoning Administrator Ken Krulik said following the meeting. “That’s why it was denied. There’s four specific criteria and his application did not specify meeting those standards.”

Schaar was asking for maximum impervious surface ratio for the project to be increased from 36 percent to 60 percent. Examples of impervious surfaces are streets, parking lots and roofs. In other words, when it rains, the water cannot pass through these artificial objects; it has to go somewhere.

Schaar’s team needed to prove “practical difficulties or unnecessary hardships” were the cause of the variance request. While questioned by the board, Schaar indicated that adhering to the 36-percent rule would cause a financial hardship in the development process. Kelly replied that the board does not consider cost in this matter; those comments were met by a round of applause from the crowd, which was then asked to refrain from further voicing of their approval.

Krulik was unsure of whether the variance decision could be appealed.

“That’s up to the developer,” Krulik said of the next step on the variance request. “He has to adhere to the regulations but he also has to justify why he’s asking for this. This whole process itself was essentially like being in court. He had to provide evidence in his testimony as to why he wanted to have these applications approved.”

Harold Yelle, Betty Mazor, Todd Eastland, and Louis Arp each testified during the variance hearing as witnesses for Neill. Mayor, Eastland and Arp are Eaton’s Ferry residents and Yelle, a professional land surveyor and engineer from Raleigh, served as an expert witness on engineering, site design and stormwater.

“Having looked at this plan, I feel like they could provide the same services, the same amount of units and still meet the 36 percent,” Yelle testified. “The problem is they’ll have to spend some more money.”

Yelle added he believes that the hotel plans were drawn without consideration to stormwater management.

When asked about stormwater runoff in August, Schaar said, “Every single project I’ve ever built, we’ve always had a storm runoff game plan on both impact and sediment and erosion control... We’re not quite there yet but I can assure you that is at the forefront of our thoughts.”

Schaar, of Montreal, has owned a home in Hubquarter Landing for more than three years and has spoken of his appreciation for the state of North Carolina, the Triangle area in which he works and Lake Gaston.

Schaar said Wednesday that his conversations with Lake Gaston residents often center on the desire for better healthcare, more affordable housing, more senior living options, and creating more business for local establishments during the fall and winter - all of which could be addressed by the project.

Toward the end of the meeting, Schaar admitted to being “naive” about the night’s proceedings, to be better prepared for the next one and promised to be more vigilant in community outreach regarding the project.

Some of Mazor’s testimony was pointed squarely at Schaar’s opening comments. She said she had been a resident of Eaton’s Ferry Estates for 19 years and personally invested in the private road near her home that she speculated could be in jeopardy because of the project.