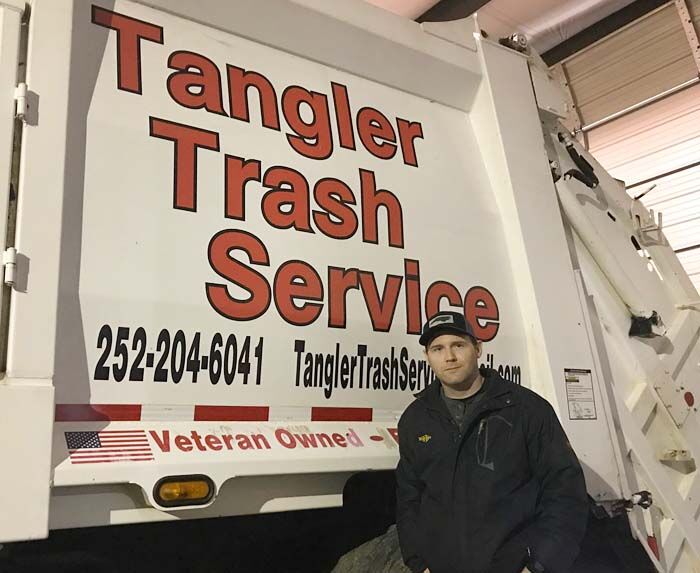 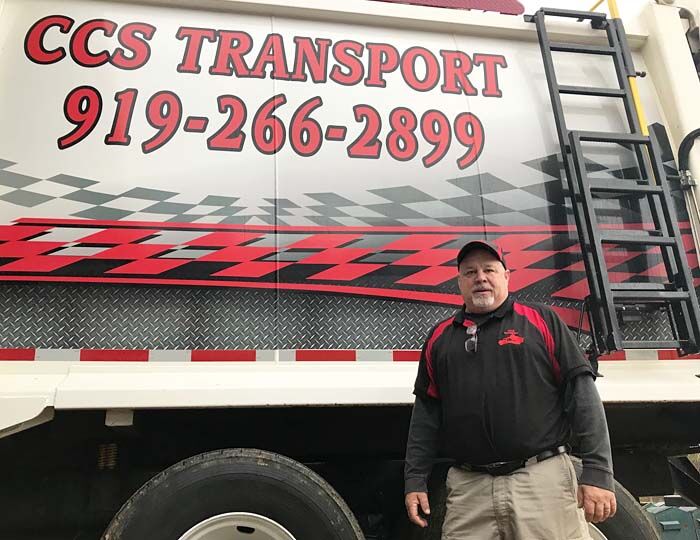 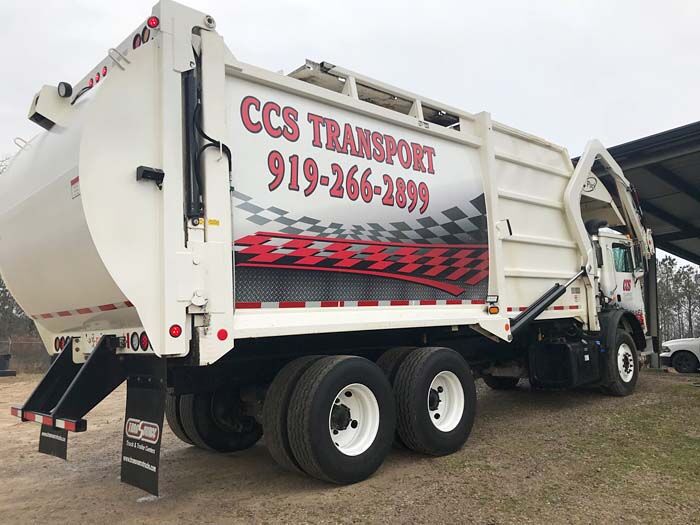 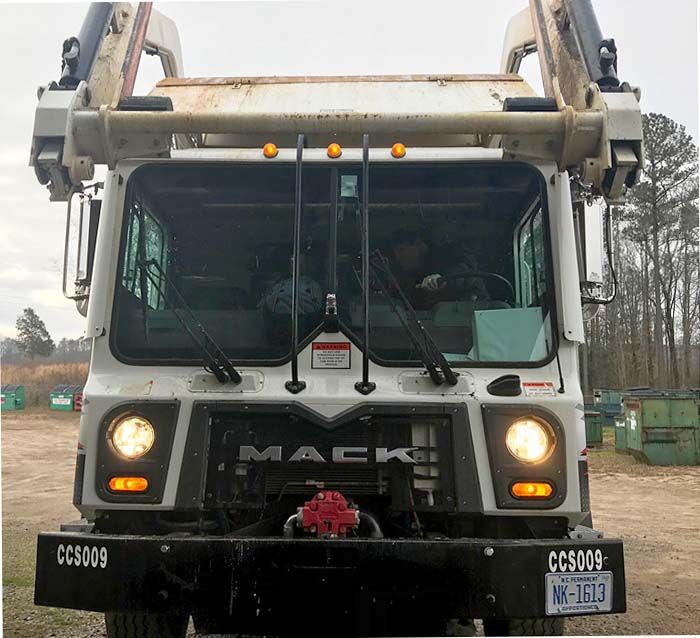 Christopher Pierce gets it all the time: “Oh, you’re Mr. Tangler,” they say.

Well, not exactly. Tangler was his call sign in the Coast Guard, but now that name has become synonymous with trash pickup around Lake Gaston in only about eight years since he started Tangler Trash Service.

There’s an important family dynamic at play here too that may slip beneath the radar of those unfamiliar with the Lake Gaston business scene. The Tangler’s father is also in the business, as of 2016, under the CCS Transport name. If you don’t know the CCS name, you might have seen the signature red dumpsters on commercial properties.

Christopher Pierce goes by his first name. His dad goes by Chris too, though Christopher is his middle name. For the purposes of keeping them straight for this story, we’ll refer to the elder Pierce as “Big Chris.”

“Father and son,” said Big Chris. “We’re sister companies (separate books). We use the same facility. We share the same vehicles if need be. We help each other out.”

They’re based in a secluded spot in Littleton that is now home to 11 total trucks, some of which are used for backup or aren’t yet active. Getting caught without a backup can cause a world of trouble for a trash man since repairs can be difficult and expensive to come by.

Christopher didn’t have that luxury when he started Tangler Trash Service with one front-loading truck. In the early years, he struggled to find customers. Now, the 2006 East Wake High School graduate has a goal of a thousand residential customers by the end of this year. CCS, meanwhile, primarily works with commercial trash or through municipal service agreements.

Believe it or not, neither father nor son dreamed of going into the trash business.

Big Chris, 56, previously owned a motorcycle shop in Wake County and sold it after 20 years before starting Capital City Signs. Through the sign business, he developed contacts - and contracts - in the waste industry, doing both work in decaling and transport.

Big Chris encouraged his son, who  had grown up in the motorcycle shop and worked as a mechanic, to get into the trash business after his time on the water in the Coast Guard. Later, Big Chris followed suit.

“I never would have expected to be a trash man, honestly,” Christopher said. “This was a complete surprise.”

“We didn’t choose it. It chose us,” Big Chris said. “When he got out of the Coast Guard, we saw the need in this area.”

Here’s a shocker: it’s not glamorous. It can get very messy - Christopher has found himself knee-deep in trash before and once, Big Chris wound up reeking from a blown jar of expired mayonnaise - but both father and son enjoy being their own boss.

Big Chris says they’re like “CEOs behind the wheel.”

“Not many trash companies have their owners driving trucks,” Big Chris said. “Most of them are sitting back in the office. He and I have taken a hands-on approach.”

Actually, the virus has been good for business. Trash pickup is not usually one of the services that citizens cut out when times get tight.

More people have been at home, especially during shutdowns last year, and produced more trash, though the Pierces point out that’s not always a good thing for the industry. The more trash the haulers have to remove, the more it costs them to dispose of it at landfills.

“We’re members of the North Carolina Waste Haulers Association,” Big Chris said. “We have friends around Eastern North Carolina that are in it, so we have perspective of many other people than just us. But we have been pretty fortunate, I feel like in both of our businesses that it has not directly affected our bottom line. It’s not a whole lot of businesses that can say that.”

It helps that Lake Gaston residents, who in many cases have relocated from cities with curbside trash pickup, are used to the service. In many rural places around the country, it’s not an option and if it is, it may come on a simple flatbed truck.

The Pierces are rolling with trash trucks that cost as much as $300K. Christopher has one in the Tangler truck bay he’s tinkering with that is automated and could one day make his life much easier. He already employs a digital approach, able to check his routes and track his trucks with the swipe of his phone. His other main driver is the “indispensable” Anthony Finkley.

“I see an increase in sales because there’s a mass exodus in the cities,” Chris said. “Everyone is looking to relocate and Lake Gaston is a hot commodity right now.”

Who you gonna call?

Christopher grew up visiting Lake Gaston and was drawn here full-time partly because he loves recreation on the lake, like wakeboarding.

Big Chris still has a home in Wake County but wife Terri lives at their lake home at Sixpound Creek, still working with the sign company.

Big Chris said he and his son had to earn the trust of the community before their businesses were really able to take off.

CCS does mostly commercial work around the lake and works on the municipal side with Franklin County while Tangler Trash Services focuses on the residents around the lake as well as Warren County.

Chris is on the move three days per week, touching every area of the lake on both sides of the state border and serves all of Warren County from the Soul City area to Afton.

But it all started for Christopher and Tangler Trash Services at Lake Gaston. When people move in, he’s one of the first people they call. They send him Christmas cards. One young boy on his route, Christopher noted, can’t wait for the truck to swing by on trash day. The youngster is always waiting and waving. Christopher even let him pull a lever once.

“I figured if I took care of the lake, the lake would take care of me,” Christopher said. “The people at the lake, once they know you, you’re in and they’ll spread the word.”