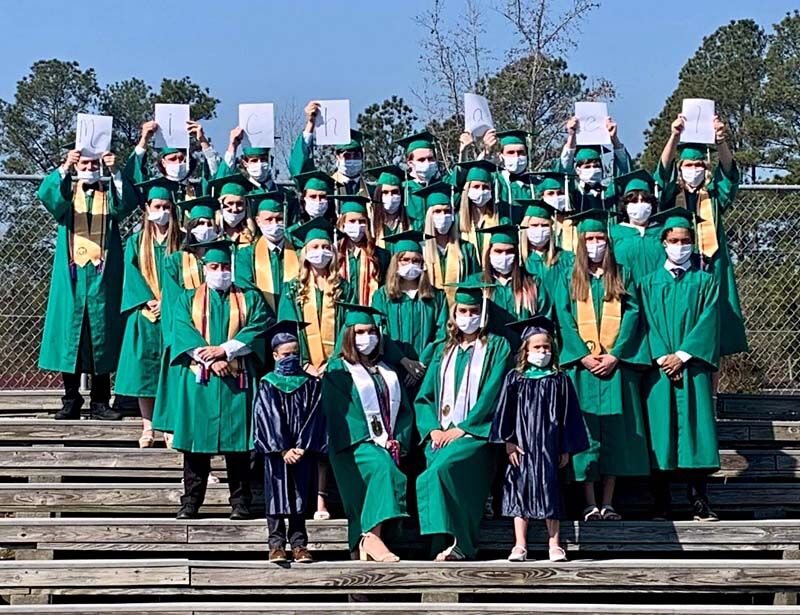 When Michael Edmonds wasn’t able to attend a senior photo session, his Halifax Academy classmates held up signs spelling out his name, letting him know he was in their thoughts as he underwent treatment. 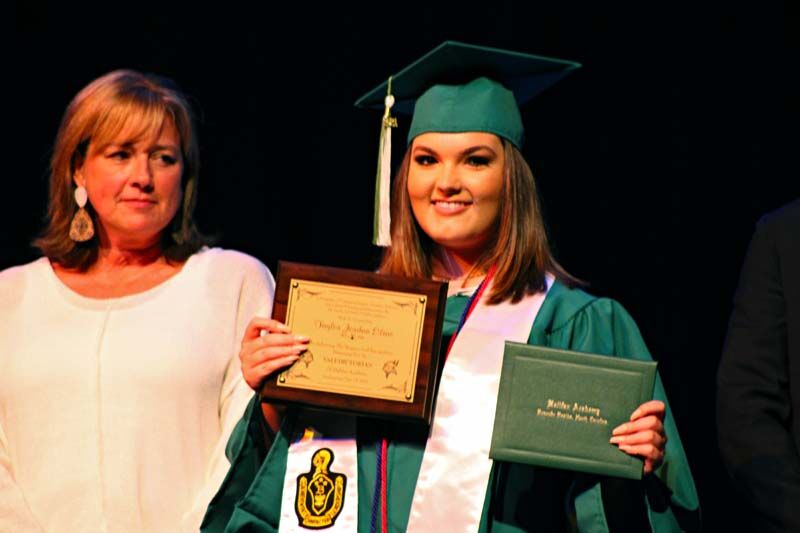 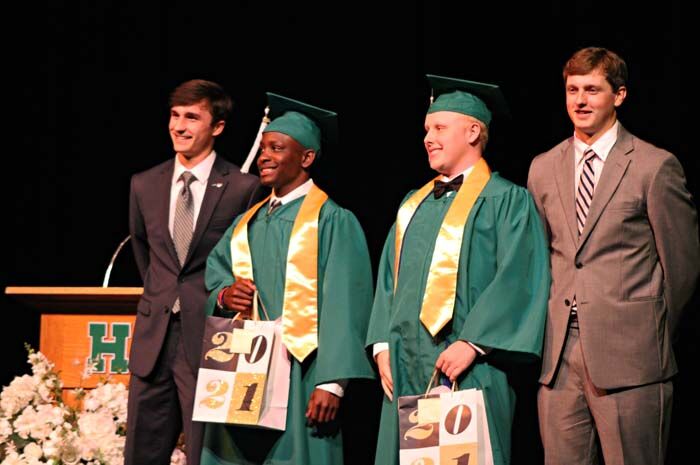 Michael Edmonds and Harrison West were presented the Dylan Moore Cowboy Up Scholarship during Halifax Academy graduation exercises on Thursday night at Roanoke Rapids Theatre. The award is given to students who exemplify courage in the face of adversity, among several other traits.

When Michael Edmonds wasn’t able to attend a senior photo session, his Halifax Academy classmates held up signs spelling out his name, letting him know he was in their thoughts as he underwent treatment.

Michael Edmonds and Harrison West were presented the Dylan Moore Cowboy Up Scholarship during Halifax Academy graduation exercises on Thursday night at Roanoke Rapids Theatre. The award is given to students who exemplify courage in the face of adversity, among several other traits.

Thursday’s Halifax Academy graduation ceremony marked the conclusion of a 44-year teaching career for Carla Little, a resident of the Lake Shores neighborhood in Littleton. All but eight of those years were spent at Halifax Academy, where her three children and husband graduated. The school has changed a lot since it opened in the late 1960s, but Little said the family-like atmosphere has always been a hallmark.

“We might not be blood-related,” said Little, a science teacher, “but we’re all family.”

That attitude helps explain why Class of 2021 graduates Harrison West and Michael Edmonds have found Halifax Academy to be such a welcoming and accommodating place.

Here, students are often following in the footsteps of their parents or grandparents.

Harrison, like the majority of his classmates, attended the school K-12 while Michael started there as a sophomore.

Before beginning school at Halifax Academy, Michael hadn’t been able to embrace his identity of having sickle cell disease. He hadn’t wanted to stand out, or be different, as a younger kid. At Halifax Academy, he joined a class that had already been supportive of West and his battle with Ewing sarcoma.

“They’ve been great,” Michael’s mother Denise Edmonds said of the school. “All three years that we’ve been there - and he’s been in the hospital at least two to three times a year since - he’s been there for a week or two weeks at a time. And they’ve always been very understanding and helped us get caught up or stay caught up.”

When Michael couldn’t make a senior photo day because of undergoing treatment, his classmates made a sign and posed for a photo to let him know his presence was still felt. They organized a “Hat Day” and made a sign that read, “We love you Michael.” “Hat Day” got a whole-page spread in the school yearbook.

Michael and Harrison bonded over facing life-threatening health obstacles, and Michael believes the school’s support of Harrison made his own transition smoother.

“They’ve always been motivating me and helping me achieve stuff,” Harrison said of Halifax Academy. “They helped with a lot of fundraisers even when I wasn’t at school. Just all my friends supported me, checked up on me, made sure I’m doing good.”

“All the kids in his class, I know them personally,” Harrison’s father Kent said. “I’ve watched them grow the past 13 years there. It’s almost like all of them are mine.”

In Michael’s case, the AP bio class even did a research project on sickle cell disease to familiarize themselves with what Michael was going through.

Little first met Michael when “he was a little fella” at Enterprise Baptist Church in Littleton. Later, he’d find a home in Halifax Academy.

As a final show of respect for their resolve, Harrison and Michael were awarded the Dylan Moore Cowboy Up Scholarship during graduation. The recognition goes to students who exhibit resilience, honesty, respect, and positive attitudes.

That’s certainly Harrison and Michael. And perhaps the entire Class of 2021. They’ll go down as the class that outlasted COVID-19 and the social distancing, masks and temperature checks that went along with it.

Through Harrison, Michael and a global pandemic, Halifax Academy’s Class of 2021 learned perseverance. The spirit of the school helped set the foundation for that lesson.

“What are their goals and dreams? What are their struggles and challenges?” said guidance counselor and senior class adviser Kristie Harris. “And just help them to meet whatever obstacle they face so we can see them succeed. It’s important for us to know the student. They’re not just a number.”

For so much of high school, Littleton’s Michael Edmonds and Harrison West hadn’t been able t…