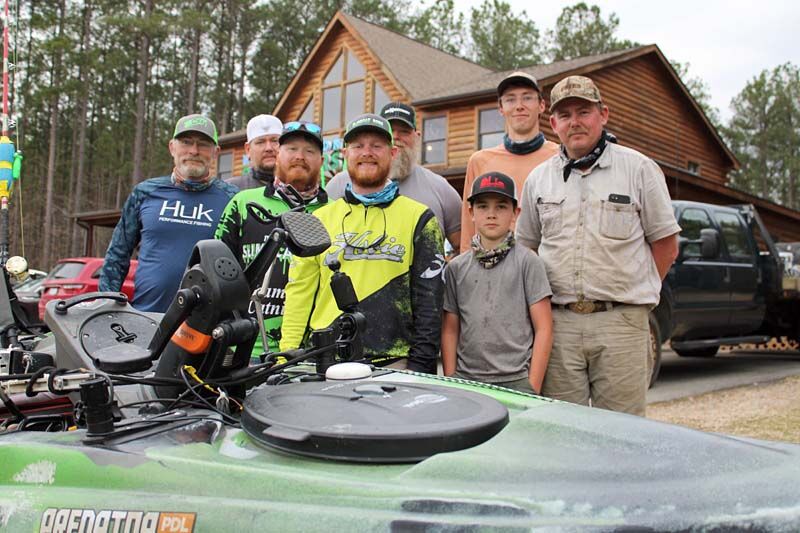 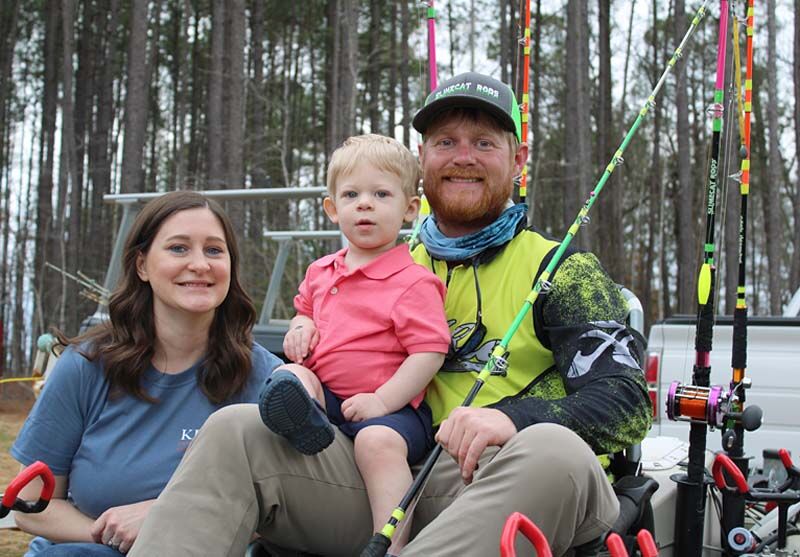 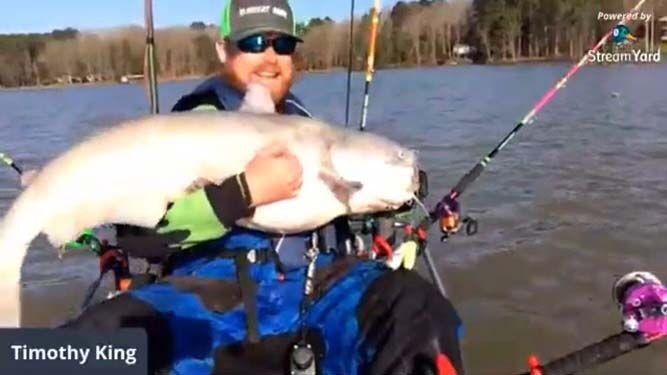 Tim King of Granville County won the overall tournament as well as the big fish with a blue catfish that measured in at 41.5 inches. 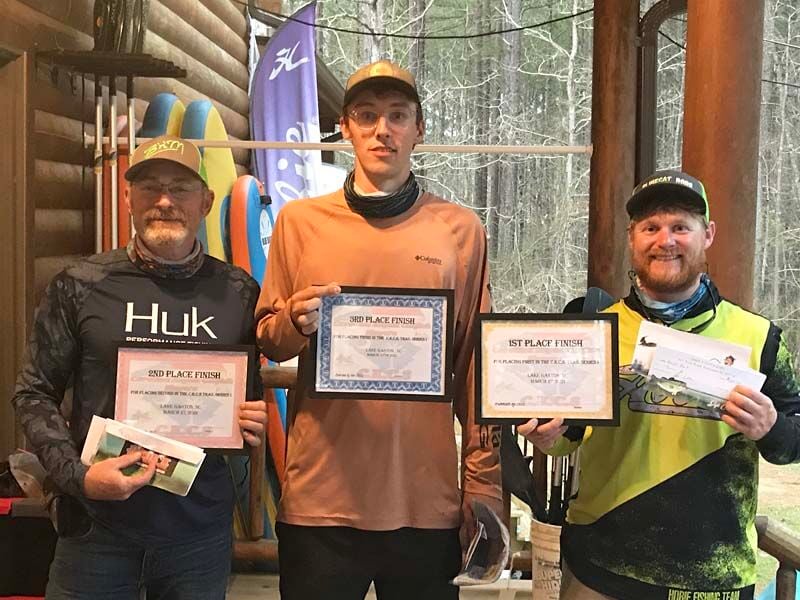 Tim King of Granville County won the overall tournament as well as the big fish with a blue catfish that measured in at 41.5 inches.

LITTLETON - Tim Peppers, from a city in Georgia named Dallas, northwest of Atlanta, only got into kayak fishing to better his game in boat tournament trails. As it turned it out, catfishing in a kayak proved to be more fruitful for him and the sport has become much more than just a means of preparation for the veteran angler.

Kayak fishing brought Peppers and several other competitors to Lake Gaston on Saturday for a Trophy Catfish Kayak Anglers tournament hosted by Lake Gaston Outfitters and won by another Tim: Tim King, 32, of Bullock in Granville County, N.C.

The winning fish on this series aren’t decided by weight, but rather length and a formula combining each angler’s total hauls.

King, instrumental in the formation of this Carolinas offshoot of Trophy Catfish Kayak Anglers along with Jesse O’Neal, posted a top fish of 41.5 inches, which King estimates was in the low 40-pound range. King had another 36-inch blue catfish weighing in the mid 30s to highlight his bag.

Peppers finished second after leading much of the day that started in the very wee, dark hours of the day before temperatures dropped steadily, adding another wrinkle to the competition. Dillon Buhl of Charlotte took third.

The victory did come with a cash prize and gift certificates for King, who brought wife Kayla and 18-month-old son Benson along, but the event was more about celebrating the sport, competition and camaraderie.

“What a lot of people don’t realize is this ain’t your grandpa’s fishin,’” said Peppers. “It’s a whole ‘nother ballgame.”

King, who calls Kerr Lake/Buggs Island home, fishes four or five times per week and serves as a guide in addition to being a competitive angler. Through kayak manufacturer Hobie, King developed a partnership with Lake Gaston Outfitters, which now sponsors King, and supplied gas money and swag for each of Saturday’s competitors.

King and O’Neal, from Rock Hill, S.C., established the kayak fishing tournament trail for North Carolina and South Carolina lakes, with Lake Gaston kicking off the new Carolinas season. King, O’Neal and Peppers fish all over the country but now have some closer options. The next event is on Lake Wateree in South Carolina.

What makes this discipline different than fishing from a boat?

For one, a bit more athleticism is required to fish the way King and Peppers do.

“I’m very busy all the time,” said King. “I’m always using at least four rods. I’m always doing something different. I like to move a lot. Some guys throw anchors out and just sit there and wait.”

The number of pleasure boaters on Lake Gaston during spring and summer makes it even more challenging. They will rock you, King warned.

King caught his best fish Saturday in 8 feet of water with a large piece of bait.

“He pulled me around like I was just a cork,” said King. “Everything else, I used my electronics. I targeted those fish and literally just put the baits right in front of their face.”

If you’re wondering, King isn’t exaggerating about the fish jostling him around. “You could easily get pulled from 20 yards to 50 yards and it’ll spin you around in circles,” he said. “So when you hook into a big fish, you have to reel up your other rods real quick to try to maintain control of your kayak because once he gets underneath your kayak, he’s going to go anywhere he wants to go. So if you’ve got anything in the water, he’s going to tangle it up.”

Most importantly, King urges prospective kayak anglers to wear personal flotation devices, no matter how good of a swimmer they are.

“Everything about our store is about introducing people to different ways to recreate,” said Lake Gaston Outfitters co-owner Dave Blodgett. “You don’t have to be on a bass boat or a pontoon. You can catch some amazing fish on a kayak.”

Call Lake Gaston Outfitters at 252-586-1770 for kayak information and search for the “Trophy Catfish Kayak Anglers” group on Facebook.