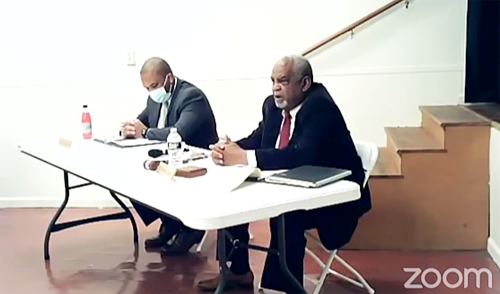 One of the public comments/questions fielded during the Dec. 29 Northampton County special meeting at the Lake Gaston Community Center inquired whether the multi-million dollar building the county plans to construct near Edwards Beach would be visible from the water.

Northampton County Board of Commissioners Chairman Charles R. Tyner repeated the question. “Will you see it from the water?” he asked incredulously before promptly providing the answer. “You bet you will.”

Tyner, unflinching while presiding over the meeting, adamantly maintained that the “Lake Gaston Project,” as it has also been referred, will be a positive addition for both Lake Gaston and Northampton County, one that won’t require any tax increases and one that has already been in the works for more than a year.

The two-story Northampton County Conference Center, as it was labeled in the county’s presentation that was live-streamed on Facebook, is designed to give western Northampton County residents better access to recreational and wellness opportunities, among other benefits. Non-senior residents are expected to have to pay membership dues to take advantage of the recreational and wellness offerings.

“We know that Lake Gaston does not have the recreation center that we have in Jackson,” Tyner said. “So why not bring the county to Lake Gaston?”

The building will also house Northampton County Health Department and Sheriff’s Department offices and is designed to serve the areas extending from Henrico to Garysburg. It may even include a part-time doctor.

“(Western Northampton County residents) shouldn't have to travel 45 minutes just to take a flu shot,” Tyner said, reiterating a point Northampton County Economic Development Director Franklin Williams made in a recent Gazette-Observer interview. Williams was on hand Dec. 29 along with other county officials as well as Michael Wray, the Democratic representative of District 27 in Halifax and Northampton counties.

“I’m ready and willing to help in any way I can,” Wray said.

In the previous interview, Williams said Oakley Collier Architects designed the project that features an 8,240 square-foot multi-purpose room and two expansive patio spaces overlooking the lake on each floor.

Boat slips, meaning the building would be accessible by water, and a walking trail are also part of the plans.

“I think we have a beautiful design and something our citizens can be proud of,” Williams said.

Williams and Tyner each said the conference center should help neighboring property values increase rather than decrease.

“What we’re putting on Gaston Lake is the top,” Tyner said. “It is the top.”

Tyner said state and federal funds, and other grants, would help pay for the conference center without requiring a tax increase.

“We’re going to do the best we can to keep our cost to a minimum,” Williams said, and Tyner added, in reference to the timeline for construction, “We’re in a hurry. We’re putting the money together as we speak.”

Tyner and other board members lamented that other counties surrounding Lake Gaston seemingly have been able to capitalize on lakefront property while Northampton County hasn’t, calling the lake the county’s “most underutilized resource.”

Tyner said state officials informed him that adding the conference center to the county’s repertoire could swiftly add a “million dollars” to its budget. “The revenues from this place is going to help the entire county,” Tyner added.

No other roads are expected be added to the area around the Edwards Beach site, which has already been purchased by the county. It will have to be rezoned, though Tyner said that won’t be a deterrent. He said Northampton County would no longer let zoning disputes hinder its growth.

Tyner opened the meeting by declaring the county’s commitment to the residents that already enjoy living in Northampton County even as its overall population and school enrollment have faced declines.

Toward the end of the session, County Manager Charles M. Jackson said, “Everyone is growing except us.”