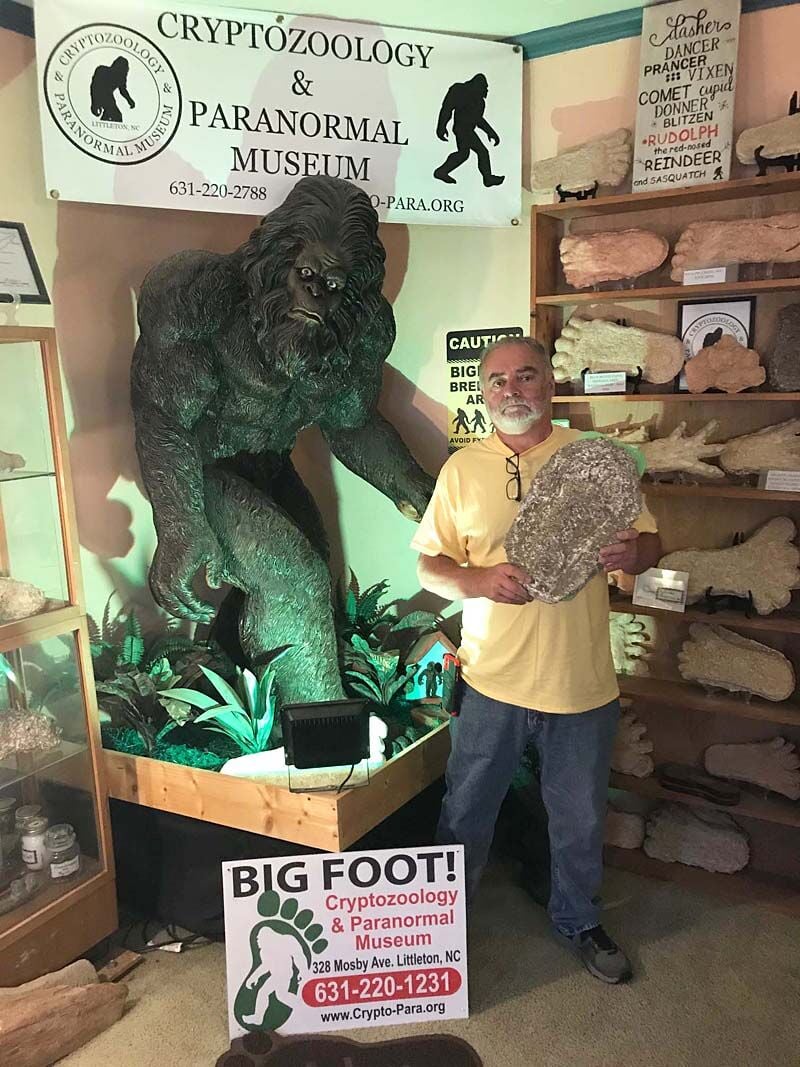 Stephen Barcelo of the Cryptozoology and Paranormal Museum holds his latest cast of a purported Bigfoot track. 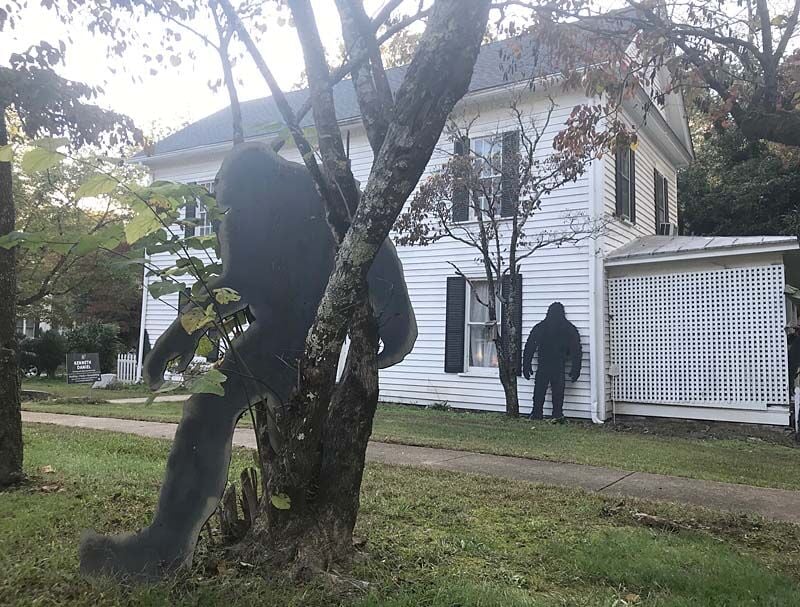 The Cryptozoology and Paranormal Museum is located at 328 Mosby Avenue near downtown Littleton.

Stephen Barcelo of the Cryptozoology and Paranormal Museum holds his latest cast of a purported Bigfoot track.

The Cryptozoology and Paranormal Museum is located at 328 Mosby Avenue near downtown Littleton.

A fresh Bigfoot encounter has been reported at Halifax County’s Medoc Mountain State Park; the latest coming just in the last few weeks.

Before eyes are rolled, consider the smiling and curious faces of some of the most recent visitors to Stephen Barcelo’s Cryptozoology and Paranormal Museum in Littleton.

Whether or not you’re a believer, it’s hard to deny Barcelo has helped put Littleton on the map with his dedication to the mystery behind the fabled creature.

What better time to check in with Barcelo, a Town of Littleton commissioner, than Halloween, although investigations of the unproven are much more than seasonal. That’s why the Long Island native and former New York Daily News journalist has been featured by regional, state and national media as well as Youtubers with international reach.

A story about Bigfoot is like a car crash, Barcelo says. You can’t look away. “Anything that brings people to Littleton is a benefit for all of us,” he said.

On Saturday, a trio of youthful adventurers from Roanoke Rapids dropped by the Mosby Avenue museum out of sheer curiosity.

Are they convinced there’s a Bigfoot lurking around the local woods?

“I think it could be something out there that people don’t know about,” said Timothy Bowen, one of the Roanoke Rapids visitors. “I’m not going to say I believe it wholeheartedly, but I’m open to it.”

Bowen, his sister Bethany Hedgepeth and their niece Gabriella Houston were toying with an electric and magnetic fields device used to detect ghostly activity in the paranormal wing of the museum, shortly after some other guests attempted to connect with spirits via a ouija board.

The Cryptozoology and Paranormal Museum house Barcelo resides in is said to be haunted and Barcelo is a veteran of paranormal investigations. His most recent and upcoming work in that field includes documenting nights in Riverside Mill and Weldon Mills buildings.

But Bigfoot is the big draw to the museum.

There have been sightings around Medoc Mountain, Littleton and Bracey in the past. Some of the stories go back 70 or more years to members of the Haliwa-Saponi Tribe.

“The stories are here,” Barcelo said. “It’s not like I came here and made this up. I just know a good story when I hear one.”

The most recent person to claim they had an encounter with a Bigfoot at Medoc Mountain says they baited... something... back to their campsite with food and discovered a track.

Barcelo made a print of the 17-inch track (He has this process down to a science) and plans to visit the park soon for further investigation. He has a growing following on Youtube (Search Stephen Barcelo) with videos explaining how he captures the prints, along with a Facebook page (https://www.facebook.com/cryptopara) with more than 6,000 likes.

One Youtube video from seven months ago, an interview by Barcelo of a local claiming to have seen Bigfoot, has close to 50,000 views.

“Well, he was black,” the man, appearing to cry, says of Bigfoot in the interview. “He was all bent over. His feet was real big.”

Of course, there are various explanations for what people are experiencing. And let’s be clear: no concrete scientific evidence of a Bigfoot has been recorded that is widely available.

Barcelo will tell you his museum isn’t the “Church of Bigfoot.” He’s just here to tell the story and do his best to provide some amount of evidence of the encounters.

Could Barcelo himself be playing tricks on the community? He’s heard that one before.

Well for starters, it would be pretty risky for anyone to put on an ape costume in an area stocked with hunters, gun-toters and even folks who aim to kill a Bigfoot. Yes, those people do exist and they’ve been to the museum.

“I have no time for shenanigans,” Barcelo said. “I’m busy helping run a town and everything else, trying to renovate this house and keep (this museum) afloat. And now I'm on the road. There’s no need to and I wouldn’t do it anyway. My background was legitimate journalism; a good, blue-collar newspaper. We got our heads handed to us if I spelled your name wrong.

Bigfoot and the pandemic

Barcelo theorizes that there have been more recent Bigfoot sightings since people have been stuck at home due to COVID-19.

But that hasn’t been able to equal more business for the museum, which features Bigfoot coffee mugs, cookie cutters, T-shirts, buttons, stickers, magnets, and artwork. Barcelo even sells camping equipment and evidence kits. There’s also a leftover “Bigfoot Sez: Vote Stephen Barcelo” for commissioner campaign sign hanging on the wall near the entrance.

COVID-19 has been a traffic killer with the museum dropping from seven days per week to just Friday through Sunday, leading Barcelo to do more traveling in the name of the mysterious as well as podcasting. The museum’s ParaCon event, normally held at the nearby Lakeland Theatre, also had to be postponed.

“We used to get people from other countries all the time,” Barcelo said. “It was amazing.”

“It’s starting to pick up a little bit,” Barcelo added. “We had just over a hundred people come through last Saturday. It hasn’t been like that in eight months. I was blown away. It was group after group after group.”

On Friday, a middle-aged couple going by “Steve and Val” walked in shortly after the museum opened at 1 p.m. They were on vacation, returning from the Outer Banks on their way home to Ohio.

Barcelo was able to tell them he was scheduled to be featured the following week on an ID TV series called Twisted Sisters regarding his investigation into serial killings in New York.

Val’s partner Steve has always been more interested in learning about unknown beings like Bigfoot or the Loch Ness Monster.

Barcelo recognizes part of the allure, especially during a pandemic, is escapism. People want to think about something other than coronavirus or politics.

Still, it’s probably best not to run into Bigfoot, even if you’re looking for one.

“I believe there is something. I just don’t know what it is,” said Hedgepeth, one of the Roanoke Rapids guests, echoing her brother’s sentiment. “And I hope I don’t find out.”