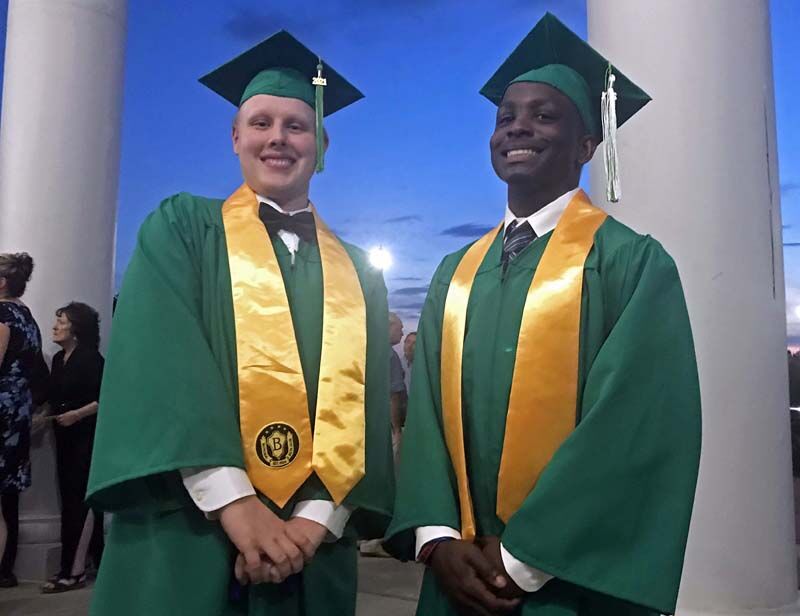 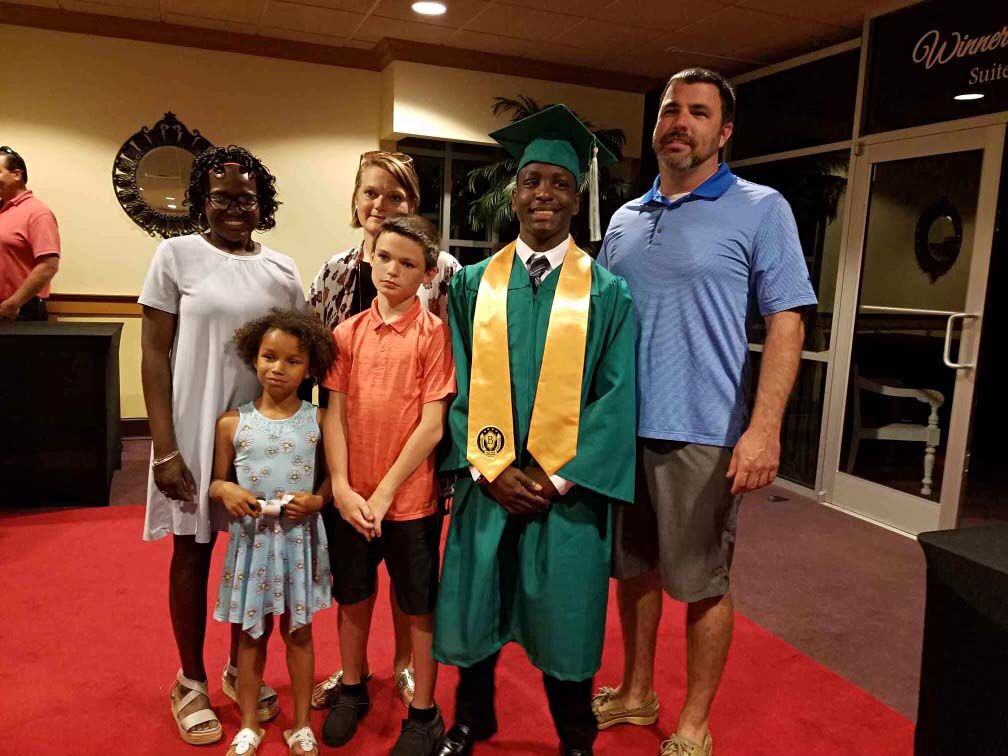 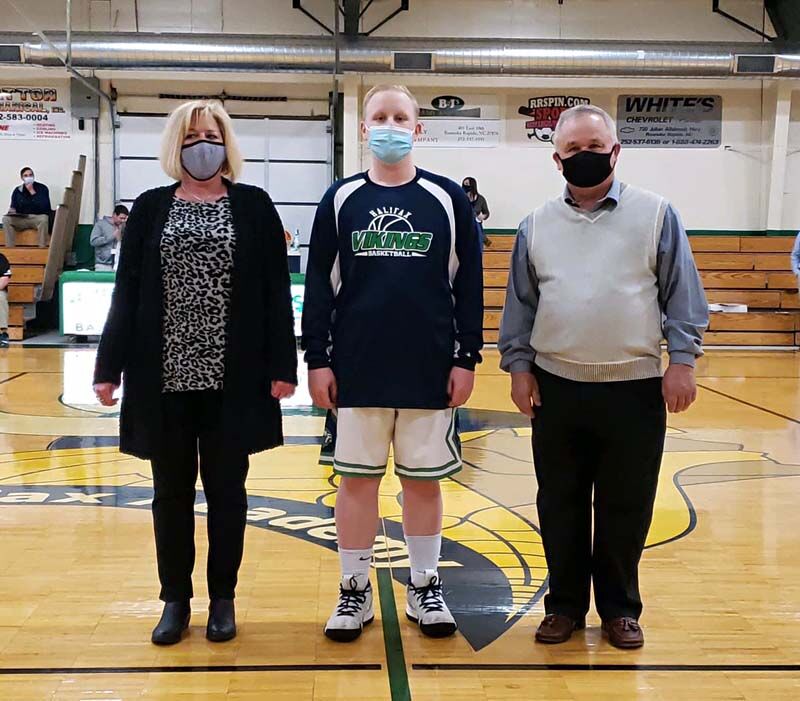 Harrison West played hoops for Halifax Academy and was honored for Senior Night with his parents Carol and Kent West.

Harrison West played hoops for Halifax Academy and was honored for Senior Night with his parents Carol and Kent West.

For so much of high school, Littleton’s Michael Edmonds and Harrison West hadn’t been able to lead normal, or typical, lives compared to their Halifax Academy classmates. Both have endured draining chemotherapy bouts - Michael for a gene therapy trial to treat sickle cell disease - and Harrison to combat the Ewing sarcoma he was diagnosed with in middle school before being dealt a 20-percent chance of survival when the cancer reemerged around his freshman year. And both have received tremendous support from their school, churches and community.

But on Thursday evening, Michael and Harrison walked across the Roanoke Rapids Theatre stage at graduation in their green caps and gowns - and gold and white sashes indicating their National Senior Beta Club membership - just as so many others in the class of 29 did. They were Halifax Academy graduates, like everyone else.

In his charge to the Class of 2021, Rev. Randy L. Martin reminded the tight-knit group that though the ceremony might feel like the end of a chapter, the word “commencement” signifies the beginning.

That sentiment is befitting for Michael and Harrison, who have longed to simply be able to enjoy life. Now, as their health has improved and college approaches, they have their chance.

While many high school students around the country spend four years planning for their dream college and fine-tuning their applications, Harrison and Michael weren’t able to load their schedules with honors courses or participate freely in extracurricular activities.

Harrison missed about a hundred days of his sophomore year while undergoing treatment - He still managed to make the A/B honor roll, by the way.

Kristie Harris, Halifax Academy’s senior class advisor and guidance counselor, said Harrison approached her then as an underclassman, determined to find a way to graduate on time.

“He has had this determination that he was going to do well in school and be in school whenever he could be in school,” Harris said. “He liked learning but also understood the social benefits. He just enjoyed being a role model and an inspiration to them because he put his academics first. Anytime he could be at school, he was there.”

Away from school, Harrison was battling for his life. His family thought the cancer had been localized to his foot and that it had been successfully removed before it spread to other parts of his body, like his ribs and skull, in 2017.

“At one point, when he was first diagnosed,” Harrison’s father Kent said. “I didn’t even know if he was going to be here; how long he’d be here. To get to graduation, that was one thing my prayers were about: to just see him walk across the stage because you just don’t know with cancer. It’s so unpredictable.”

Father and son both love basketball, and keeping up with UNC’s program, although mother Carol West is a Duke fan.

Both Harrison and Michael have received treatments, and the bulk of their care at Duke University Hospital, and Harrison always makes sure to have on the lighter shade of blue for his visits.

Kent expected Harrison to be a key basketball player for the Vikings before high school started and the cancer returned. Ultimately, despite being on the team as a 10th-grader, Harrison wasn’t able to take the court until his senior year.

“It really changed me: chemotherapy and being diagnosed,” Harrison said. “When I first went back to school in eighth grade, I thought I could just go back to doing everything that I did. But you have to accept the fact that you’re not like everyone else, which took me a while to understand.”

Harrison eventually progressed from chemotherapy to radiation therapy by his junior year and has been going for checkups every three months since then.

His story inspired sister Carly, who graduated from Halifax Academy three years ago, to become a radiology tech, having recently completed the first half of her education at Vance-Granville Community College.

Harrison will attend East Carolina University in the fall with hopes to pursue a career in sports, whether through broadcasting or coaching.

Reaching a place of optimism, with something to look forward to, is a blessing in itself for the Wests.

Faith is a crucial element in both of these journeys to graduation. Both the West and Edmonds families credited their churches - Littleton Baptist and Enterprise Baptist, respectively - for their support. Halifax Academy is a private Christian school and that spirit was reflected in Thursday’s graduation addresses as salutatorian Emerson Poole and valedictorian Taylor Elias each cited Bible verses in their speeches. Elias spoke about God having a plan for each graduate.

Michael’s parents have been telling him that for a long time. Sickle cell disease, diagnosed at birth, has been agonizing at times for Michael, having often led to emergency room visits because of the intense pain associated with “sickle cell crises.”

“He’s definitely a trooper,” Michael’s mother Denise Edmonds said. “We say that God’s got a plan for him because he keeps getting him through obstacle after obstacle.”

“We’ve told him that God’s got a plan for you,” Davis Edmonds, Michael’s father said. “Something. We don’t know what yet, but it’s the reason he’s still here.”

The Edmondses are a unique family. Michael and his biological sister Amy were adopted by Davis and Denise. The Edmondses have a biological son, Carter, and another adopted child, Mya. The children range in age from 7-year-old Mya to Amy, 20.

And that’s all Davis and Denise know. They love each of their children as their own, because biologically or not, they are.

The family dynamic did mean Davis and Denise had to learn a lot about a disease they weren’t familiar with. Sickle cell disease affects millions of people around the world and is common among those with ancestors from sub-Saharan Africa, Spanish-speaking regions in the Western Hemisphere, as well as parts of the Middle East, India and Mediterranean countries. It occurs among one out of every 365 Black or African-American births, according to the Centers for Disease Control and Prevention.

In patients with sickle cell disease, a group of inherited red blood cell disorders, “the sickle cells die early, which causes a constant shortage of red blood cells,” according to a CDC description. “Also, when they travel through small blood vessels, they get stuck and clog the blood flow. This can cause pain and other serious problems such as infection, acute chest syndrome and stroke.”

The disease has forced Michael to have both of his hips replaced, and a shoulder replacement is also scheduled for the near future.

Michael became the first Duke patient to receive a breakthrough gene therapy treatment and the 17th overall in the country when the process started in January, confining him to the hospital for six weeks of his senior year. Two more weeks in Durham followed before three weeks of COVID-19 quarantining.

The therapy includes the extraction and modification of stem cells, chemotherapy and regular blood transfusions to fight the sickle cells.

So far, it’s working. Like Harrison, Michael also missed out on sports, although he was able to join the basketball team his junior year. Now, Michael can play drums again in church, and ride four-wheelers.

Michael intends to study welding at Halifax Community College and continue having a positive impact on society. Graduation, as Rev. Martin highlighted, is only the beginning. “I think it’s a sign,” Michael said, “that everything’s going to be OK.”

Thursday’s Halifax Academy graduation ceremony marked the conclusion of a 44-year teaching career for Carla Little, a resident of the Lake Sho…