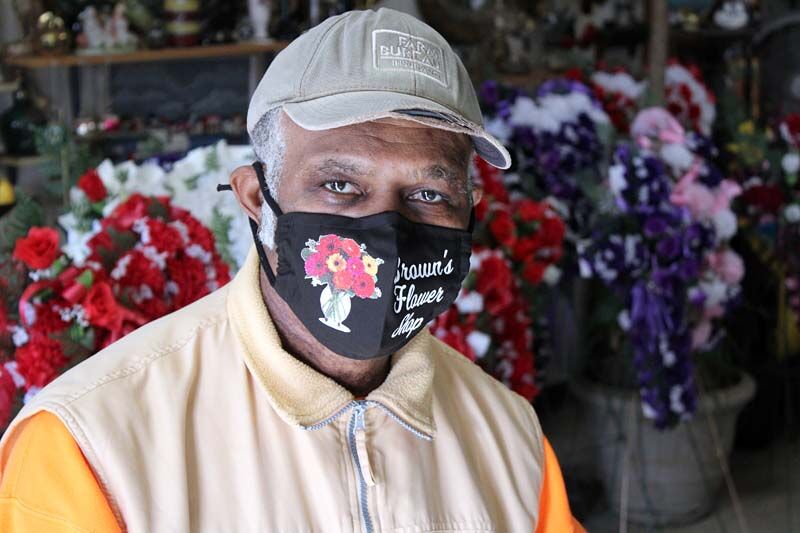 Richard Brown opened Brown’s Flower Shop in 1994 and the store has called Littleton home ever since. 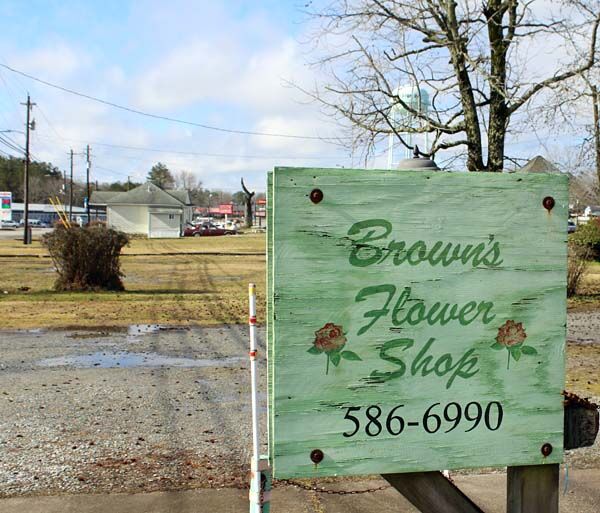 Brown’s Flower Shop, with the Littleton water tower in full view from the parking lot, is located at 308 US-158.

Richard Brown opened Brown’s Flower Shop in 1994 and the store has called Littleton home ever since.

Brown’s Flower Shop, with the Littleton water tower in full view from the parking lot, is located at 308 US-158.

LITTLETON - Much of Richard Elvis Brown’s life has been spent within a mile and a half radius or less in the Littleton town limits. The house he grew up in on Catmint Lane off Bacon Road isn’t far from his current residence, which is within walking distance of the Brown’s Flower Shop business he started in 1994.

Ever contacted a place of business and asked to speak to the owner? You’ll get no runaround at Brown’s. There’s an excellent chance Brown, 62, will be the one answering the phone or sitting behind the counter at 308 US-158 since he is the store’s only full-time employee.

Brown, who doesn’t fancy modern technology, is as straightforward as he is old-fashioned. He didn’t start this business to get rich and the customer base he has established over the years knows it can trust him because of it.

“A man is supposed to work from the sweat of his brow,” Brown said. “And I often heard my brother use that (phrase). If a man don’t work, he shall not eat. But I can’t eat knowing that I didn’t earn it. That’s the way I am.”

For Brown, working in the floral profession goes back to his days helping out at Gussie Silver’s Flower Shop, beginning in the early 1980s.

Gussie would recognize his talent, but not right away.

“I kept working and working until she gave me a job,” Brown said. “Then I went in and watched her work. Easy to catch on.”

One time, the Silvers needed to leave the store and Brown filled in, taking care of the business from orders to production. He knew then he could do the job longterm.

The Silvers had their store from 1979-90 and Gussie, an 83-year-old Northampton County native, still lives in Littleton and arranges flowers from home when she can.

“He was taught by a good person,” Silver said of Brown last week before laughing. “That was me.”

Brown’s sister, Mary, had long encouraged him to go into business for himself, and she died from cancer not long after he achieved his dream. “I strived hard to get it,” Brown said.

Brown opened his shop downtown, with the help of the Silvers, before eventually moving to his current building for more parking space.

Mary would be proud, and their mother too, who would have turned 100 last year, but passed away about 22 years ago. She used to sit on the porch at Catmint Lane making flowers out of wax paper. That planted a seed of inspiration for Brown, who went on to attend the nearby McIver school and then Davie before graduating from Northwest Halifax High School in 1978.

“Not a day goes by that I don’t think about her,” he said, “because she often spoke to me that my day was coming.”

What Brown can do for you

If not for his service being needed for funerals, Brown wonders whether he would be able to keep the doors open.

He said the effects of COVID-19 haven’t positively impacted his sales and that he noticed Valentine’s Day was much less busy than last year.

Flower Style Magazine reported in November that retail florist sales in the U.S. were expected to fall about 7 percent from 2019 to 2020, stemming from the sort of supply chain disruptions that have impacted so many industries.

There’s nothing Brown would dislike more than having to charge customers more than what they’re used to paying, even if he has to spend more to get the product. He goes out of his way to give them fair deals.

“When you can make an honest penny,” Brown said, “that spends better than knowing that you took from somebody.”

“It’s very important because it’s not another shop within 16 miles that you can get fresh-cut and silk flowers,” Gussie Silver said. “... He does excellent work, puts in a lot of time and has a lot of different designs. Anything you need, he can draw it out for you. It’s very important to keep a place like that in town.”

There aren’t many other brick-and-mortar flower shops around, but Brown, who attracts clients from well beyond the Littleton area, said some florists work out of their homes.

As for keeping with the times, Brown says no thanks; he’ll stick to word-of-mouth advertising and down-home service. He sketches out designs by hand before cutting them out of styrofoam to make displays.

“I don’t even know how to cut a computer on,” he said.

And he wouldn’t take one if you gave it to him anyway.

It’s not uncommon for Brown to stay at work well into the night - that’s when he concentrates best.

Brown, who has two daughters and three grandchildren, works amid a host of antiques and collectibles that make his store feel a little bit like a museum. He’s been collecting all sorts of things, from model trains to Mickey Mouse, since he was a child.

At his counter, there’s a photo of Martin Luther King Jr. and former Congressman and Civil Rights leader John Lewis, and Brown said he is proud to be among the relatively small fraternity of Black business owners in the area.

The Cornerstone Holiness Church member believes he has never had a bad day because all of God’s days are good.

Littleton, which has been celebrating “Black Heritage Month” in February, has changed quite a bit since Brown was a youngster. For better or worse, it will always be home for him.