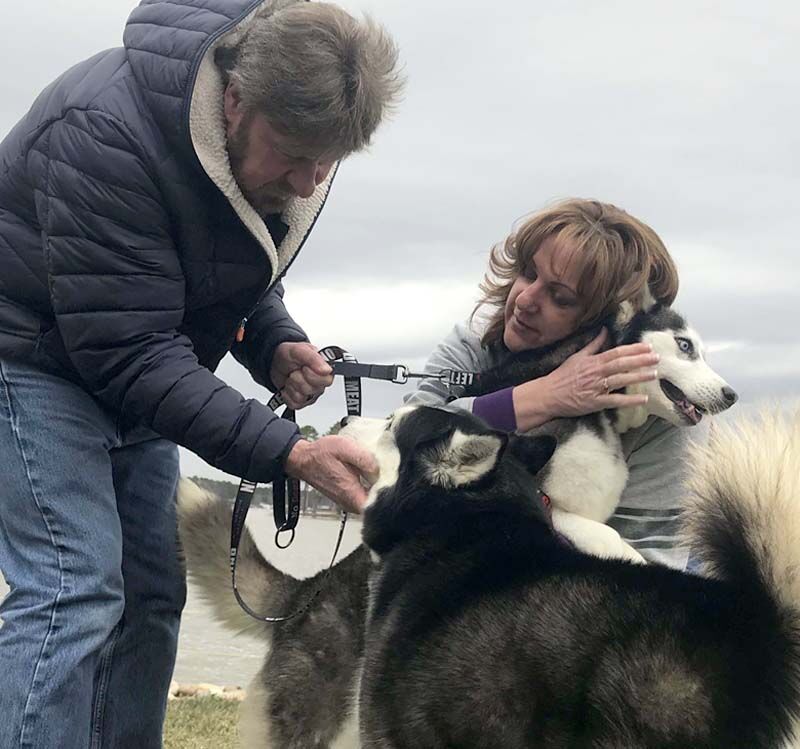 Lake Gaston’s Billy and Ali Benson adopted a pair of Siberian huskies from China this year. Nanook is getting a hug from Ali while Billy pets Wolf. 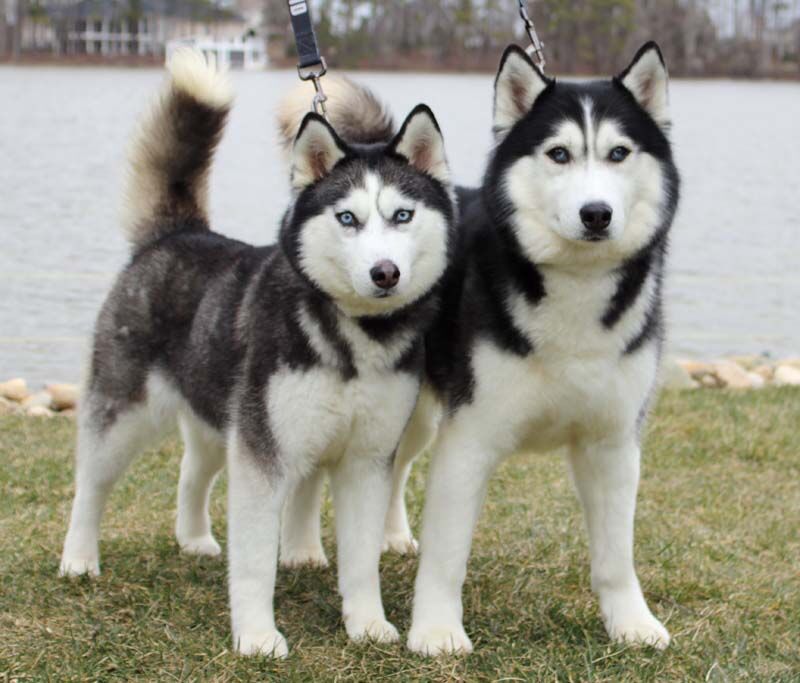 (From left) Nanook and Wolf. 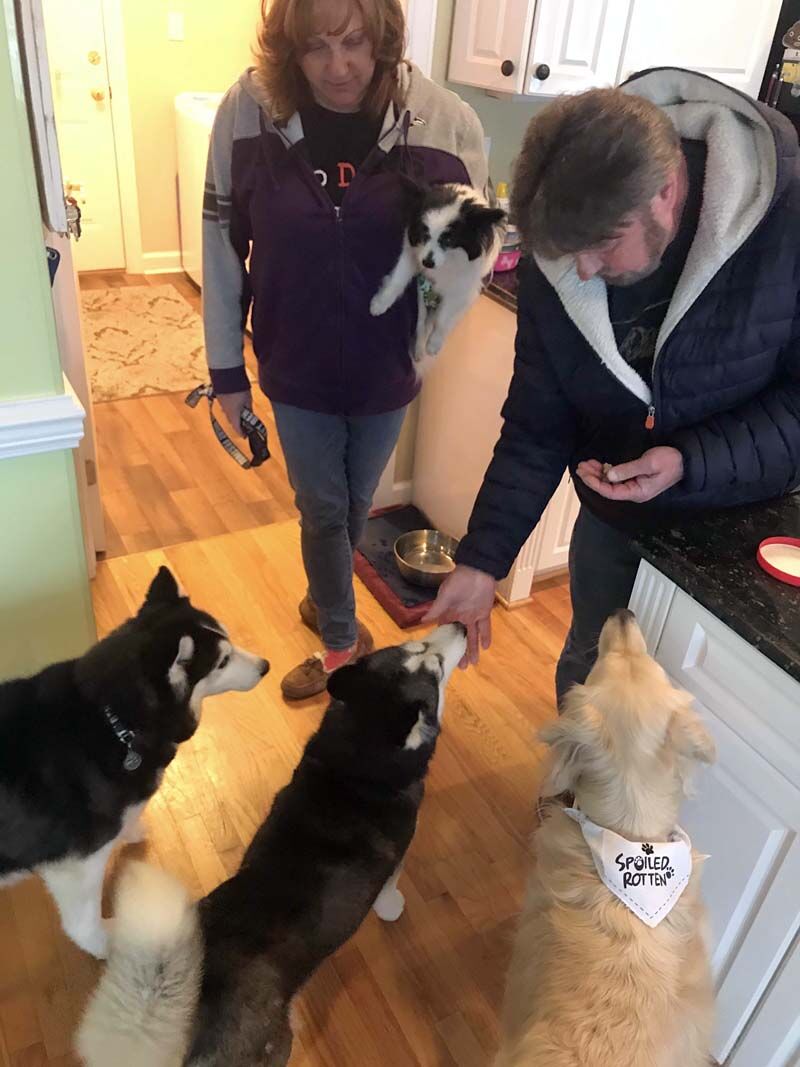 The whole crew, including Cassidy and Sophie. 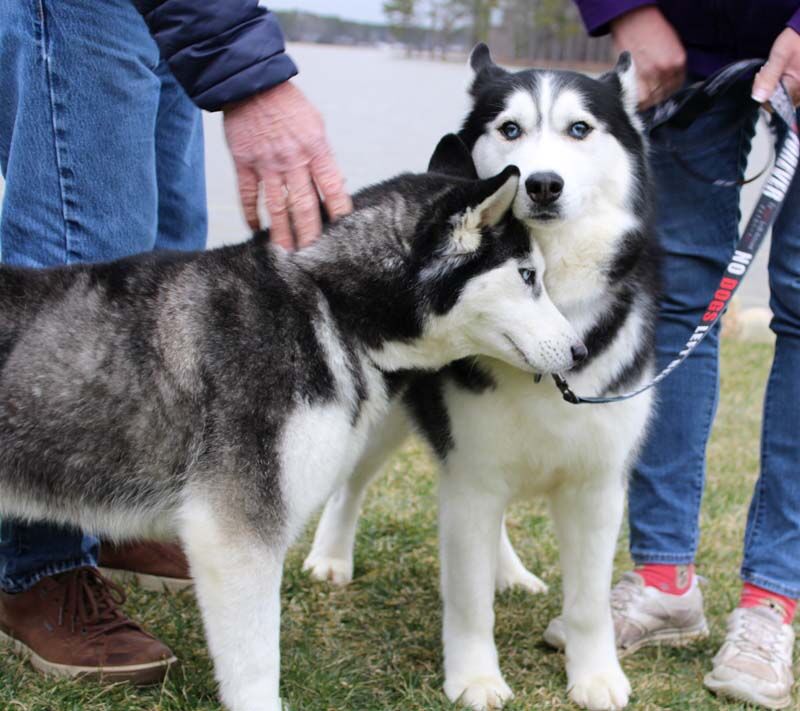 Nanook, facing the camera, took up for and bonded with Wolf after meeting him in a Chinese dog sanctuary. Wolf’s vocal cords had been removed, so he wasn’t as adept at communication.

Lake Gaston’s Billy and Ali Benson adopted a pair of Siberian huskies from China this year. Nanook is getting a hug from Ali while Billy pets Wolf.

(From left) Nanook and Wolf.

The whole crew, including Cassidy and Sophie.

Nanook, facing the camera, took up for and bonded with Wolf after meeting him in a Chinese dog sanctuary. Wolf’s vocal cords had been removed, so he wasn’t as adept at communication.

LITTLETON - At one point in their young lives, Nanook and Wolf were trapped on separate slaughter trucks in China, likely en route to torturous deaths before being eaten.

Wolf’s vocal cords had been removed through a primitive procedure with no medical safeguards before he met Nanook and formed an inseparable bond with her at a sanctuary south of Beijing. On Friday, the striking Siberian huskies lounged in a Lake Gaston living room with the south shore of the lake providing a scenic backdrop in their new home with the Bensons. In about a month’s time here, they’ve taken to Cheez Whiz, dog toys and walks by the water after their 7,000-mile journey that was a year in the works.

Ali and Billy Benson, the owners of WatersView Restaurant, welcomed Nanook and Wolf into their family and seek to assure the huskies of their safety, although there are a couple of language barriers.

“I mean,” Billy said, “they’ve probably never been this comfortable.”

NO DOGS LEFT BEHIND

The Bensons adopted Nanook and Wolf through No Dogs Left Behind, an American-based international nonprofit that fights animal cruelty around the world and operates dog sanctuaries in Dayi and Gongyi, China.

Jeffrey Beri founded the organization in 2016 after leading a rescue effort to transport more than a hundred slaughterhouse survivors from China to the United States. The dogs were bound for the Yulin Dog Meat Festival, an annual Chinese event in which more than 10,000 dogs are eaten.

“Dogs victimized by the dog meat trade suffer horrific abuse,” the No Dogs Left Behind website writes. “They are beaten, bound with wire around their jaws and feet, and crammed into sharp metal cages, where they endure long transports without any food or water. At the time they are rescued, they are wounded, starved, dehydrated, sick, and terrified.

“It takes countless hours of patient effort to show these survivors that they are safe, and to teach them to trust humans again. Jeffrey and his team work tirelessly with the dogs to train, rehabilitate and socialize them, a critical step to ensure they are ready for adoption.”

According to England’s The Independent, a 2016 nationwide survey in China found that 64 percent of Chinese citizens wanted the Yulin festival shut down and 69.5 percent have never eaten dog meat. The Bensons say their own research revealed that younger Chinese generations, in particular, oppose inhumane treatment of dogs.

But the abuse hasn’t stopped yet and the Bensons stepped up to adopt Nanook and Wolf into a home that already had Cassidy, a 16-year-old papillon, and Sophie, an 8-year-old golden retriever.

Billy had 38 years of experience with huskies as pets and initially, when he and Ali applied to adopt from No Dogs Left Behind, they had Nanook in mind. The Bensons didn’t realize at the time Nanook had “bonded” with Wolf and that the organization sought to keep the pair together.

Taking on two more dogs was a big step, but one they couldn’t pass up after being convinced that Nanook and Wolf had the potential to socialize well with other dogs.

They signed the adoption agreement Jan. 30 of last year before COVID-19 delayed the process by a year. After monitoring Nanook and Wolf online for many months through No Dogs Left Behind chats and social media, and an initial flight grounded by the Chinese government, the huskies landed in New York on Jan. 29 with a host of other rescue dogs before another private flight to Richmond, Va. on Jan. 30.

The Bensons got down on their knees to greet their new, long-awaited loved ones as the leashed pair darted through a couple of automatic airport doors to meet their new owners on the other side. Nanook immediately rolled over in delight next to Ali.

“It was just like it was meant to be,” Ali said.

TAKING UP FOR WOLF

For the Bensons, who moved to the lake from Smithfield, Va., being “dog people” is a lifestyle, and it’s one they are deeply immersed in. When they married last fall after 22 years together, the couple asked guests to donate to the Warren County Animal Ark instead of buying gifts.

“It’s another being,” Ali said of how she views her pets. “And the animals communicate. They communicate with us. They understand. They’re empathetic. They feel emotions. If I hurt myself and I’m crying, I have three dogs running over to me.”

The exact age of the newest additions is unknown although Nanook’s and Wolf’s official birth year has gone down as 2017. The second part of Wolf’s full name is Epizon, Greek for survivor. Many dogs that have their vocal cords cut out like Wolf die from infection.

Both have blue eyes but Nanook’s are especially piercing as she looks out for Wolf, who tries to bark but can only muster a muffled, raspy sound. So Nanook does the speaking for him.

“She took to him right away in there,” Billy said of the sanctuary.

Nanook likes to be the leader and isn’t shy about vocalizing her desires while Wolf is more timid, but clearly eager and willing to be loved.

Acclimating to their Lake Gaston home was difficult at first; the dogs had to adjust to a new time zone, language (English) and food amid their new surroundings. But they’re beginning to thrive, spending hours on end snoozing and getting along well with the other dogs in the house. Nanook, who is growing very curious about the lake water, already knows her name and Wolf is still working on his. They know when it’s breakfast and dinner time and how to alert their humans of this matter.

Last week, they had their first daycare trip to Lake Gaston Dog Boarding and had a blast running around and playing.

Their new lives are so vastly divergent from what could have been, and what was, that it’s hard to comprehend. Nanook and Wolf have experienced some of the worst that mankind has to offer, but have been awarded refuge. Do they know it?

Looking at his huskies lying on the living room floor, several minutes into their late afternoon nap, Billy tried to make sense of it all, saying, “I think they appreciate this.”

VISIT https://nodogsleftbehind.com to donate or find out more about adopting rescued dogs.