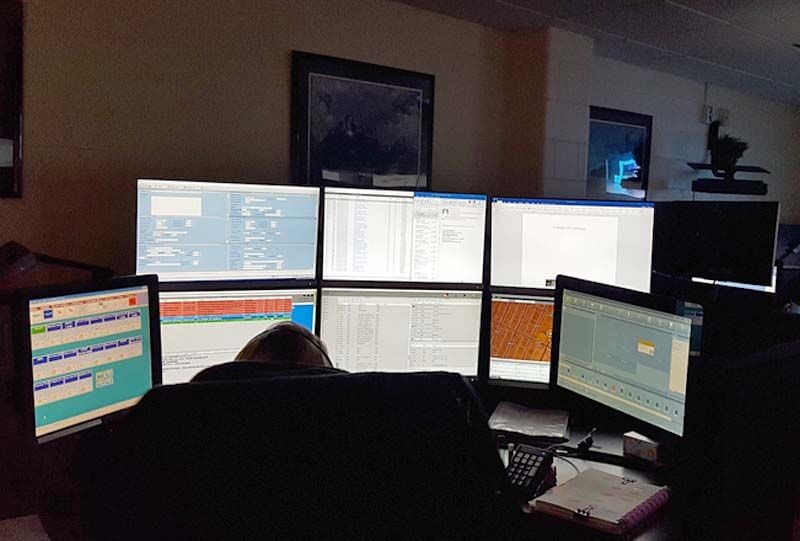 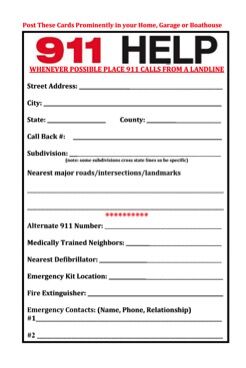 Lake Gaston is bordered by five counties. Two of them, Mecklenburg and Brunswick are in Virginia. Halifax, Northampton and Warren are in North Carolina. This may be nothing more than an interesting fact were it not for the complications that arise in pinpointing a particular location. Location is the most important piece of information to know when reporting an emergency. We’ve all heard the stories or experienced them ourselves, and generally complaints related to the rapidity of emergency response are part of the story. But the fault or failure to locate the emergency may be our own. It’s just not that simple.

Sherry Herzing has her own story of tragedy. In August of 2018 her husband Bob collapsed while helping a neighbor build a deck. As a neighbor administered CPR, another called 911. The call came from Brunswick County but was received in Warren County. The caller was instructed to call back on a 10-digit number that would connect more directly with the Brunswick station. Who in an emergency can remember a 10-digit number? Or necessarily have the tools to write it down?

Another call was made, and this one arrived in South Hill. Forty-eight precious minutes passed before EMS arrived on the scene and by then it was too late to save Bob Herzing.

As Sherry was attempting to settle into the grief of finding herself widowed, others were reflecting on this same tragic outcome. As Sherry says, what happened next was “not a Sherry thing, but a God thing.” When Sherry reached out to the Brunswick county emergency services, Sheriff B.K. Roberts and first responder Devon Clary had already determined that this can never happen again. This was a turning point in attempting to coordinate emergency response around the lake and it revealed a lot.

Eighty percent of 911 calls come from cell phones, but cell phones can be notoriously inaccurate in providing GPS locating information. Cell phone towers do not recognize county boundaries but rather send the call to whichever county is closest to the side of the tower that receives the “ping.” Sheriff Roberts made 24 test calls from all over the county. Of those only four went to the Brunswick call center and one was directed to Colorado. Clearly the system in place was not working.

Sherry learned that the emergency services of the five counties had never sat down and talked to each other. She quickly realized the importance of coordinating the efforts of these counties and organized a meeting: an invitation welcomed by the five public service answering points (PSAP). All were struggling with failures of their own responses, an issue exacerbated by lack of proper equipment, lack of proper training opportunities and a lack of understanding the full scope of the problems they were confronting.

Additionally, all five counties have been handicapped by funding limitations that restrict their ability to hire sufficient personnel. Two people are required to respond to any emergency and if two are not available, callers are advised to proceed to the closest hospital. Maps afforded limited assistance as maps stopped at the state border, which meant responders encountered blank space if they had to travel through the adjoining state. Many addresses in Warren County, for example, require traveling through Virginia to reach them. The issues were many and absolute, or so it seemed. Undaunted, Sherry took her case to a local women’s club. By the end of the meeting, 32 women had signed up to help and thus, the LKG 911 Community Taskforce was born. This is of course an abbreviated version of all that went on in the three years since Bob Herzing died. But everything changed when the counties came together to meet Sherry Herzing’s redemptive grief.

Since that fateful day in August 2018, much has been improved. The PSAPs are talking and coordinating services. Calls are still not necessarily routed correctly, but the stations have the ability to transfer a 911 to the appropriate county. Using dock permits were found to provide street addresses; information acquired when Sherry connected with another preventable tragedy, a death on a dock that could not be located. GIS (geographic information system) points on the Lake give specific longitudinal and latitudinal coordinates and have been largely mapped thanks to Andy Wells. Reflective signs are now available for homeowners to effectively mark their street address. And efforts are being made to educate the public on how to help the telecommunicators understand the location of any emergency.

How you can help

Vital to receiving a quick response in any emergency is location, location, location. Know what county you are in. Know how to direct EMS most effectively to your location. Be sure everyone else knows the county. Fill out the 911 card and keep it in a visible location in your house, on your dock. The first question you will hear when calling 911 is, “Where is the location of your emergency?”

Ben Duncan, director of emergency services in Mecklenburg County, notes that people obviously get agitated in an emergency situation; but stay on the line and answer any questions. Be patient. Help will be dispatched immediately and the answers to these questions will alert the responders to what they will be dealing with. Answering the questions will not slow response, but will provide helpful information. All information goes into the system so that if a caller inadvertently hangs up or is disconnected, the information is preserved on the screen. Staying on the phone is critical to receiving prompt response. Callers often think their location can be traced by cell phone signal alone, but this is not necessarily true.

Henry Hedgepatch, communications manager of Halifax County E911, adds that unintended calls happen on occasion. If 911 is called by accident, a telecommunicator will attempt to return the call. Answer and clarify that there is no emergency. If you do not answer and a location is pinpointed, EMS will be sent out. This takes valuable time and resources away from a real emergency. Telecommunicators are required to answer every call if possible. If your power is out or water not on or there is a (non-emergency) animal control issue, the number to call is 411 or the 10-digit number that can be looked up.

Specific information on what you can do to help yourself until help arrives is available on the LKG 911 Community Taskforce website (rural911taskforce.com). This includes how to order reflective signs for your street address, how to order a new dock permit (many are no longer readable), how to participate in the Neighbors helping Neighbors initiative, which provides first aid and CPR instruction (uncertified) and how to purchase and use a neighborhood AED. Also information on the app What3Words, that will tell exactly where you are, information on administering dog CPR, on boater safety classes and on how to help.

Volunteers are needed in the areas of videography, photography, reporting, grant writing and presenters for basic task force information and intro to emergencies. To volunteer, contact: LKG911TaskForce@gmail.com

Packets with complete information about how to respond in an emergency can be found on the website or at Wildwood Nursery and the Lake Gaston Regional Chamber of Commerce office. Soon they should be available at businesses, marinas and real estate offices.

National Public Safety Telecommunicators Week concluded last week. Show your appreciation for these unsung heroes who respond to us in our greatest time of need. Mr. Duncan reminds his telecommunicators that while they deal with thousands of emergency phone calls, the person at the end of the line is having the worst day of their life. The voice you hear when you dial 911 is a person who has dedicated their life to helping others. Mr. Hedgepatch emphasized that these people are motivated by a sincere desire to help others. They hurt when we hurt and feel the weight of failed responses.

Please help them to help you and do all you can to educate yourself and those you care about.

Devon Clary is a hometown girl who not only made good but is doing good in her community.