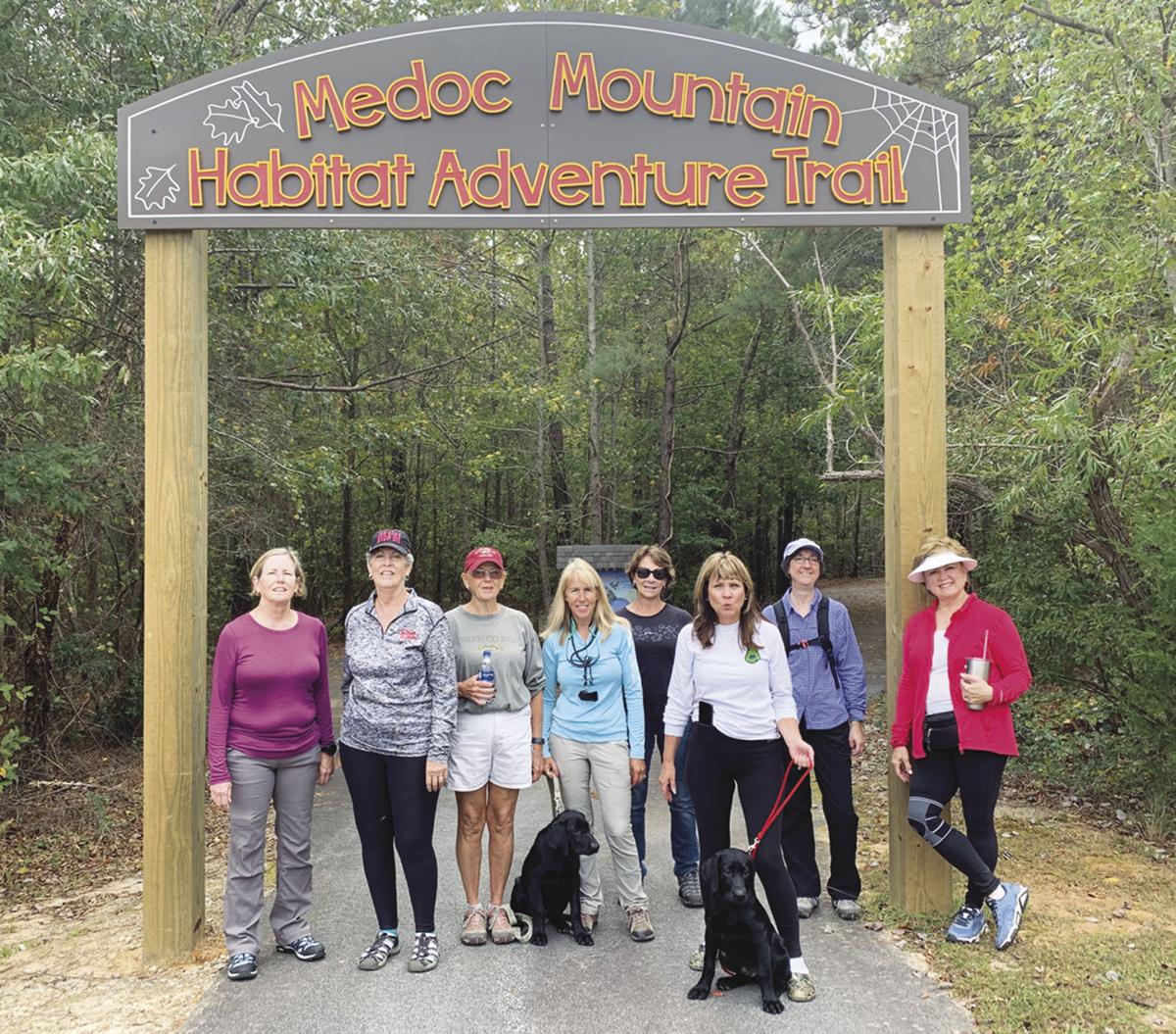 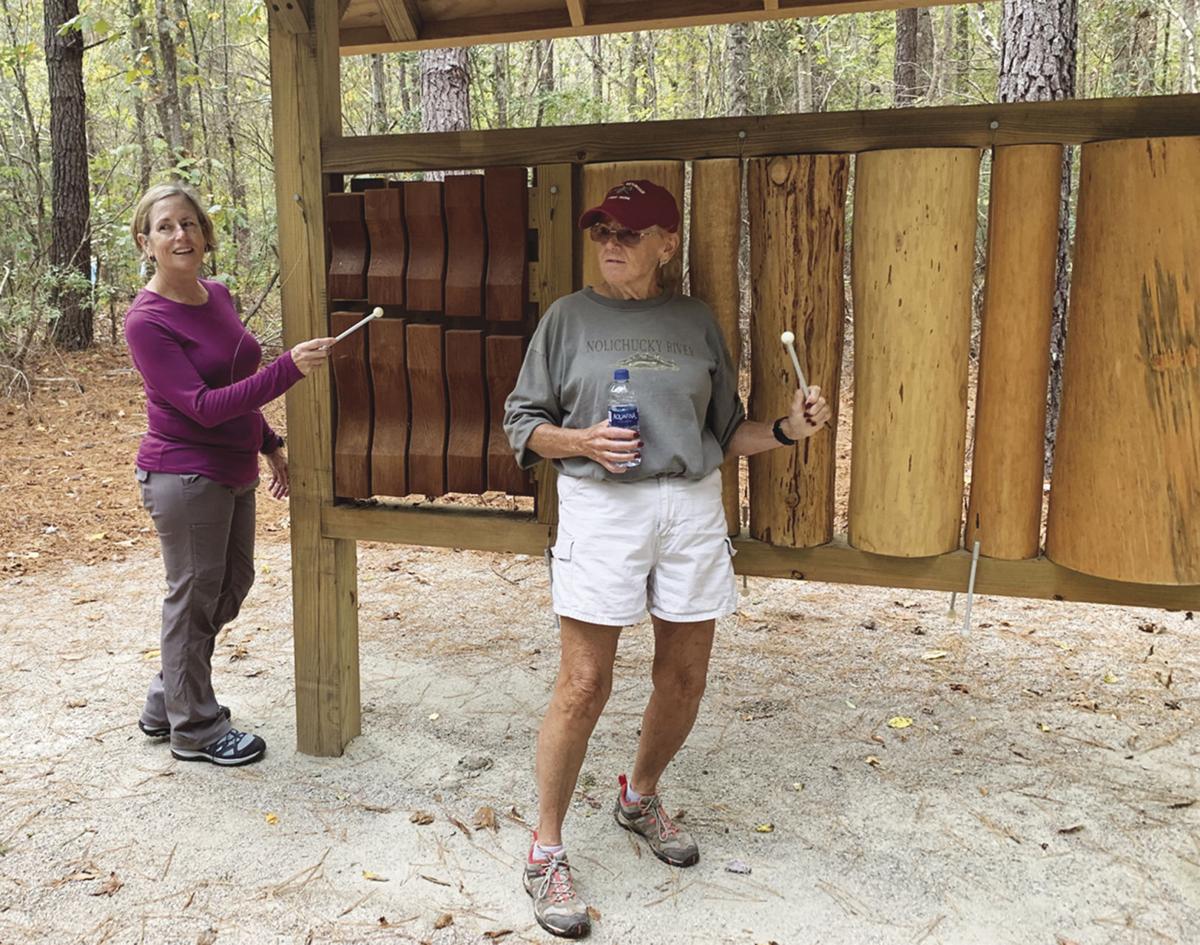 She Doers, from left to right: Karen Wrigley and Paula Jones playing at the “Woodpecker Drumming” station.

Mary-Rose Woodward, pictured front center, taking a selfie of the She Doers in the spider web found at the “Climb Like a Spider” station. Others, from left to right, are, first row: Lea Beazley and Karen Wrigley; second row: Kelley Hall and Rena Hussey; back row: Trudy Stanek, Michele Orff, and Paula Jones.

She Doers, from left to right: Karen Wrigley and Paula Jones playing at the “Woodpecker Drumming” station.

Mary-Rose Woodward, pictured front center, taking a selfie of the She Doers in the spider web found at the “Climb Like a Spider” station. Others, from left to right, are, first row: Lea Beazley and Karen Wrigley; second row: Kelley Hall and Rena Hussey; back row: Trudy Stanek, Michele Orff, and Paula Jones.

Up for a fun, unique-to-the-area nature experience nearby? Medoc Mountain State Park in Hollister, N.C., has just what you’re looking for. It’s called the “Habitat Adventure Trail,” and it offers eight different stations along a .28-mile paved path located near the park office.

Each station offers participants hands-on, interactive ways to learn about the animals, geology and habitats of the park. Designed for pre-kindergarten through middle school-aged children, it is really great fun for folks of all ages (as you’ll see from the photos of the She Doers when they hiked it last October).

At the first station, called “Woodpecker Drumming,” two large panels on the front and back of a kiosk identify the different woodpecker species inhabiting the park and explain how they communicate. Next to the kiosk, a large, wooden, xylophone-and-log exhibit encourages participants to “See what it is like to be a woodpecker and give these logs your best drum roll!”

The second station, called “Woodland Café,” features a kiosk with a panel that encourages participants to search for their meal the way the animals at Medoc Mountain do. “Will you dig through the soil with your claws or fly through the branches with your wings?” it asks.

To the left of the kiosk, there is a colorful concrete dining table with logs seats and an ordering booth. Featured items on the menu include plump caterpillars, wiggly worms, assorted arthropods, reptiles and amphibians, and seeds and berries.

The advertised special of the day is “Fried Green Cicadas” for 25 cents each. “Comes with your choice of a side: acorn chips, oak leaf salad, snail soup, or wiggly worms,” says a sign posted on the booth. How cute!

Station number three is called “Explore the Mountain!” and features a large mound of dirt with a tunnel through it. “Climb this smaller version of Medoc Mountain – or crawl through the granite bedrock below,” reads the nearby display panel. The panel explains how Medoc Mountain formed and exactly what a geologist is. “Pretend you’re a geologist – can you find shiny crystals or small grains of sand in these rocks?,” it asks.

The fourth station is especially fun and requires good balance! It is called “Balance Like a Squirrel” and consists of a series of log balance beams and upright logs participants are encouraged to walk across. The panel at this station asks and answers the question, “How do squirrels keep from falling as they leap across trees?” It also describes what squirrel nests look like and encourages participants to look for them in the branches of large oak trees.

At the fifth station, entitled “Climb Like a Spider,” there is a huge spider web for folks to climb on as well as a colorful display panel that explains why spiders don’t get stuck in their own webs. It also provides the identifying characteristics of one of the most common spiders in the park.

“Wildlife Spotting” is the name of the sixth station. It explains that thousands of different species of animals live in the forests of Medoc Mountain State Park and encourages participants to quietly look and listen for them.

At this station, numerous decoys of animals have been hidden in the forest behind a series of panels with holes drilled through them. The display invites participants to look through the holes to see how many of the decoys they can find.

The seventh station is called “Frog Music.” Here, the panel text explains that frogs and toads “make sounds by slowly letting air out of a sac that vibrates in their throat” and that frogs sing when they are trying to attract a mate, mark their territory, or announce an upcoming change in the weather. “Sometimes frogs squeak when they are frightened or hurt,” it adds.

In addition, this station has a fun, interactive component where participants can turn a crank to imitate the clicking sound of a cricket frog song. Another component encourages them to imitate the sound of a bullfrog by slapping a rubber paddle on the side of some pipe drums.

The final station is called “Waterdog Rock Hop.” A display panel here features a huge illustration of a rare salamander called the Neuse River waterdog and explains that it lives in Little Fishing Creek, a stream that flows through the park. This species of salamander “only lives in streams and rivers connected to the Neuse and Tar rivers of North Carolina – and nowhere else in the world!” says the display text.

The panel asks participants to “Pretend you’re a bug and hop from rock to rock, but don’t fall in – the waterdog might catch you!” referring to a series of large boulders located nearby.

So, grab the grandchildren (or don’t, if you want to act like a kid again), and head out to Medoc Mountain State Park for a fun day on the park’s “Habitat Adventure Trail.” Learn more about what else you can enjoy while you are there by visiting ncparks.gov/medoc-mountain-state-park/home.