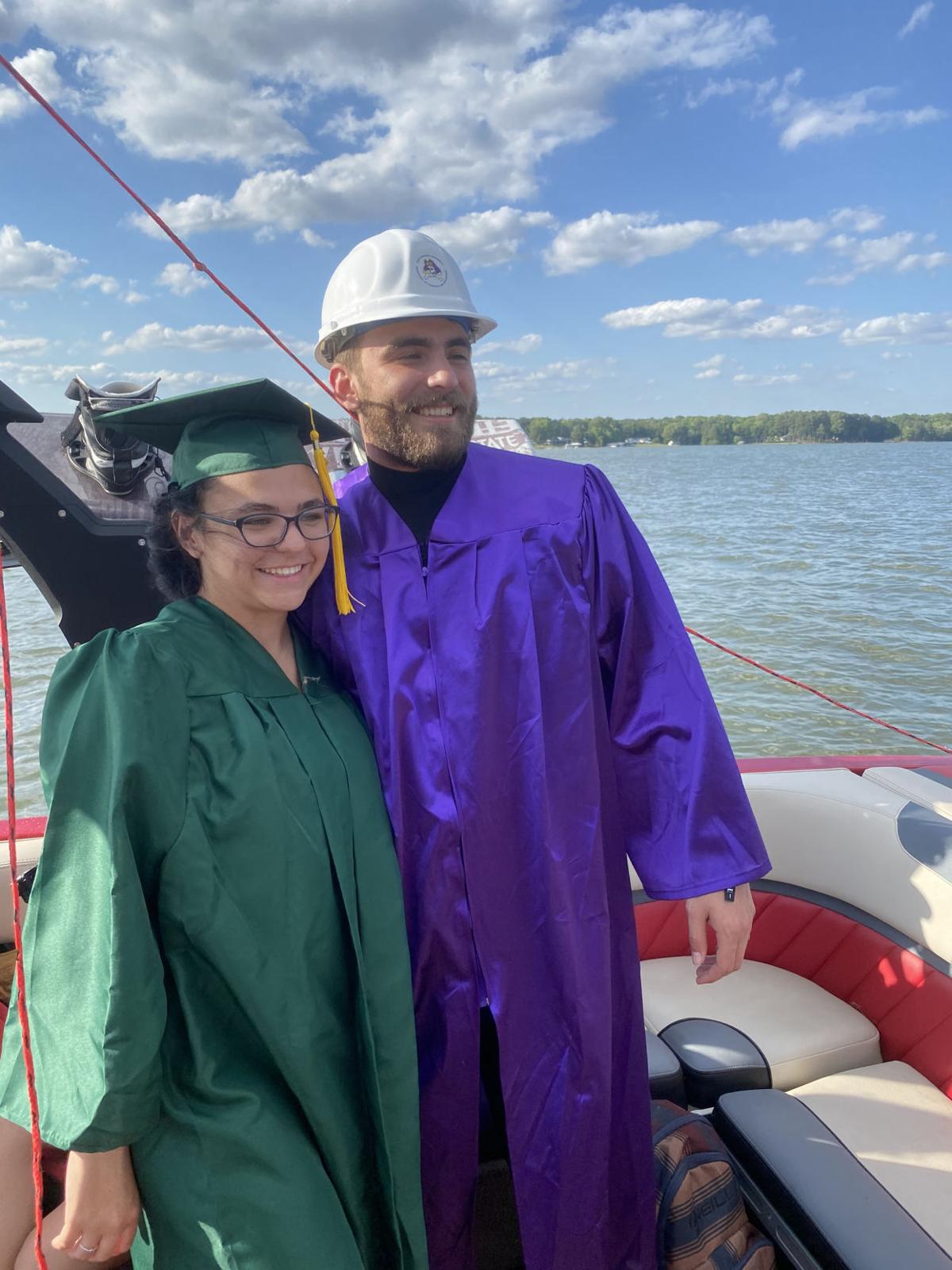 Jake Skumpija graduated from ECU this year with a degree in construction management. His sister, Sarah, graduated from high school and plans to start classes at UNC Charlotte in the fall. Both of their graduation ceremonies were canceled this spring. 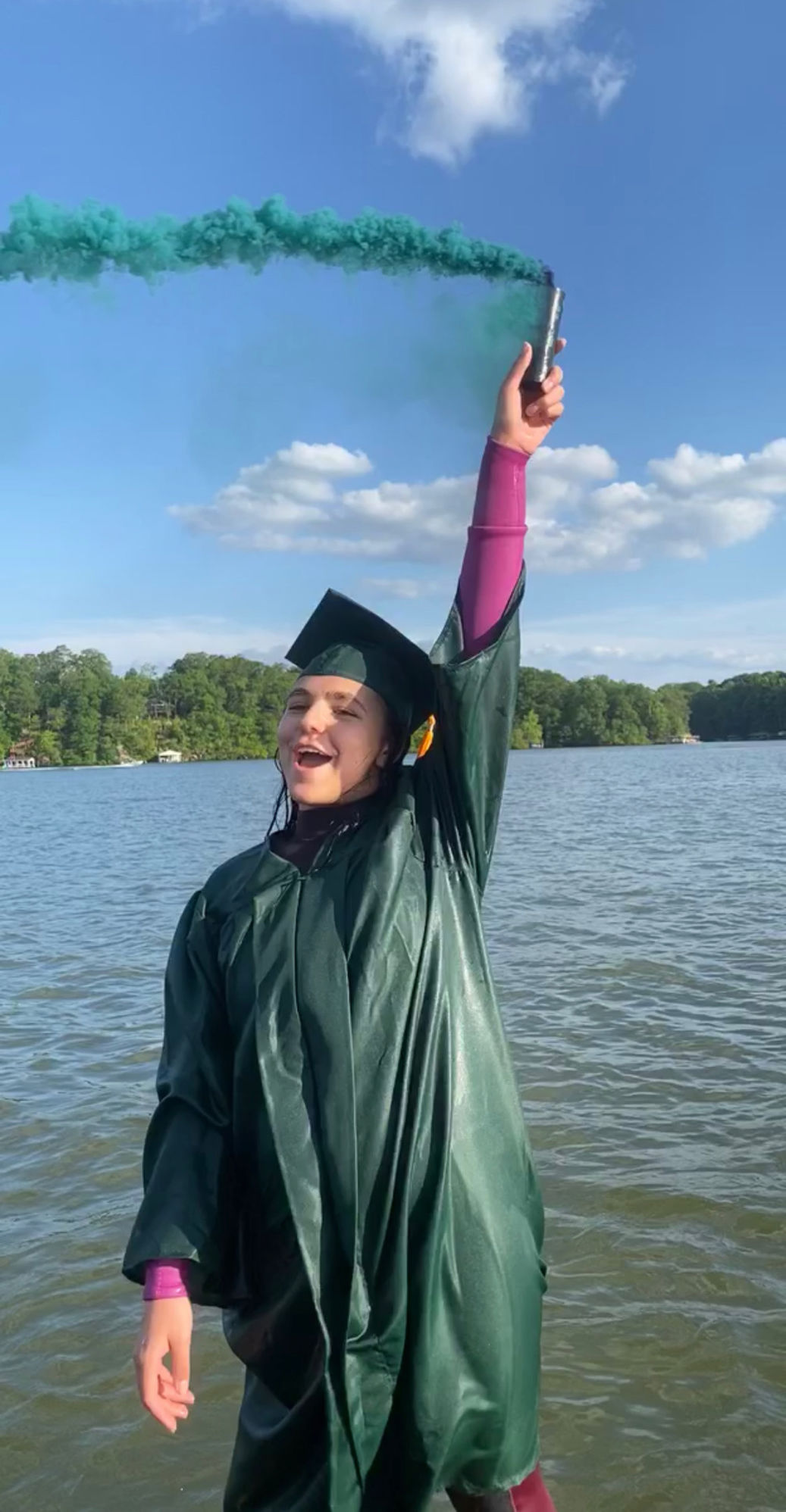 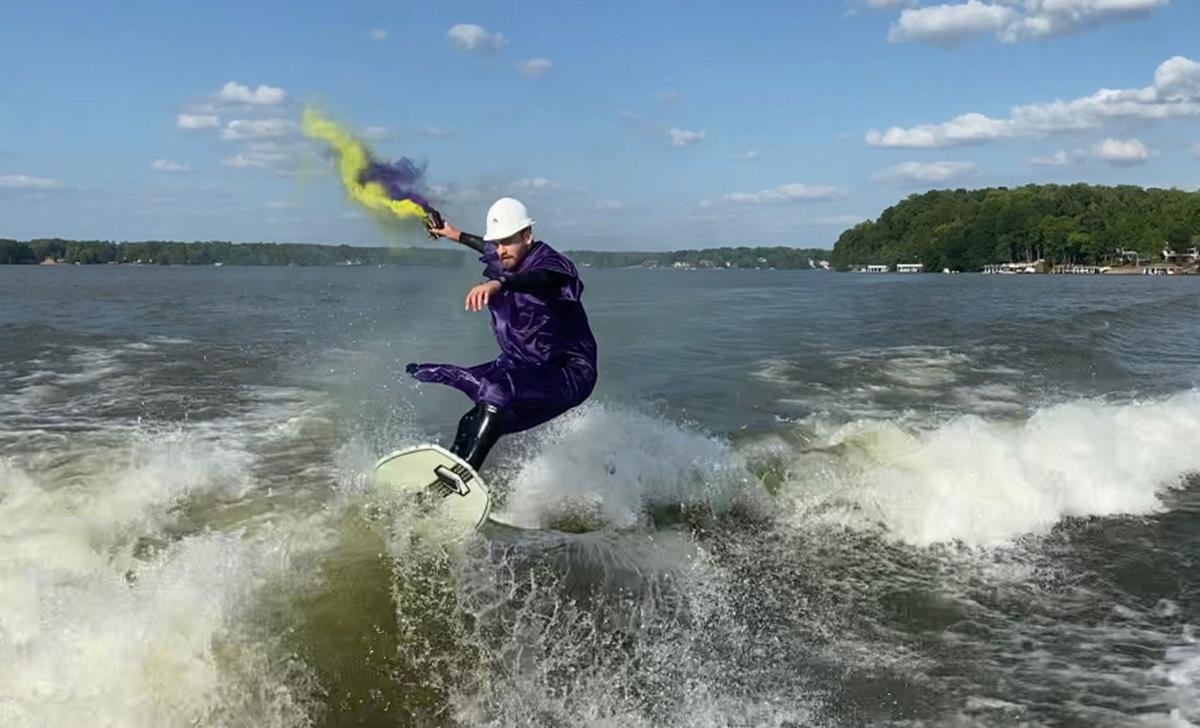 Jake Skumpija celebrates graduating from ECU by wakesurfing in his gown while holding smoke bombs in his school’s colors.

Jake Skumpija graduated from ECU this year with a degree in construction management. His sister, Sarah, graduated from high school and plans to start classes at UNC Charlotte in the fall. Both of their graduation ceremonies were canceled this spring.

Jake Skumpija celebrates graduating from ECU by wakesurfing in his gown while holding smoke bombs in his school’s colors.

In wake of the coronavirus, college and high school seniors have experienced a fallout of school services in athletics, after school programs, social functions, and graduation. Some schools have postponed ceremonies and celebrations until later in the summer, and some have canceled them all together.

To help fill that void, families and communities have come together to honor recent graduates by posting their pictures around town, shouting them out on the radio, or in private celebrations, like the one the Skumpija family hosted for their children on Lake Gaston a few weeks ago.

Jake Skumpija graduated from East Carolina University with a degree in construction management, and his sister Sarah graduated from high school. To celebrate with their family, the two wakeboarded and wake surfed in their graduation gowns with smoke bombs in hand billowing their school colors.

J. Skumpija’s video was posted on the Lake Gaston Community Facebook page and received hundreds of engagements, comments, and shares.

“I just kind of saw some stuff like that online and people surfing in their gowns,” he said. “I saw an advertisement for smoke bombs and thought I would throw the two together.”

J. Skumpija said that he had a job lined up that he was working part time as a student last semester and another as a backup, but both have been put on hold for now.

“As soon as the virus hit and things slowed down, they told me to wait on them to figure out how they’re going to move forward,” he said.

Originally from California, the Skumpija’s grew up in Chatham County and have had a house on Lake Gaston for about two years. Through the lockdown, the family has been able to quarantine on the lake while working on the house.

“Other than what we’ve done, the school had a virtual ceremony that was pretty much all of the college heads giving speeches and then we turned the tassels,” he said. “We will most likely have an actual graduation on a departmental level something during the year, hopefully.”

J. Skumpija says that in a way, it feels like he’s been robbed of the graduation experience, but he especially feels for his parents.

“My mom has been looking forward to this for a long time,” he said.

S. Skumpija also celebrated her high school graduation from Northwood in Chatham County by wakeboarding with smoke bombs in her high school colors. She plans on attending UNC Charlotte in the fall, but has heard rumors that her first semester might be virtual.

Aside from missing out on a graduation ceremony, S. Skumpija’s varsity women’s soccer season came to an abrupt end followed by her after school dance classes leading up to a May 5 dance concert, the last concert of her high school career.

Her senior prom was also canceled, but she said that it might get rescheduled for later in the summer.

S. Skumpija said that her classes were only partially interrupted, she was already taking online classes through the local community college, so the transition to online learning was easy.

Both graduates said that trying to complete their schoolwork at the lake poses some challenges, both in concentration, but also because of the internet connection.

They also said that their parents might be feeling the effects of missing graduation more than they are.

“I joke around with my son, ‘I deserve that graduation more than he does,’” said their mother, Lisa Skumpija. “In the whole scheme of everything that’s going on, our businesses have kept going. We are lucky, anything that we are missing doesn’t compare to people that have been hit in more difficult ways. Our whole focus as a family has been trying to focus on what we have. That’s been my parental model for them growing up.”

L. Skumpija said that the family spent the first few weeks of the pandemic helping others and focusing on the community before they began quarantining themselves.

“I think I’m more bummed than they are. It broke my heart,” she said. “As soon as we heard the ‘Pomp and Circumstance’ graduation song, I just started bawling.”

The silver lining, L. Skumpija said, is that the family could spend the past several weeks together and take the time for family meals, puzzles, and games. Other than missing graduation, it has felt like she is at summer camp with her kids.