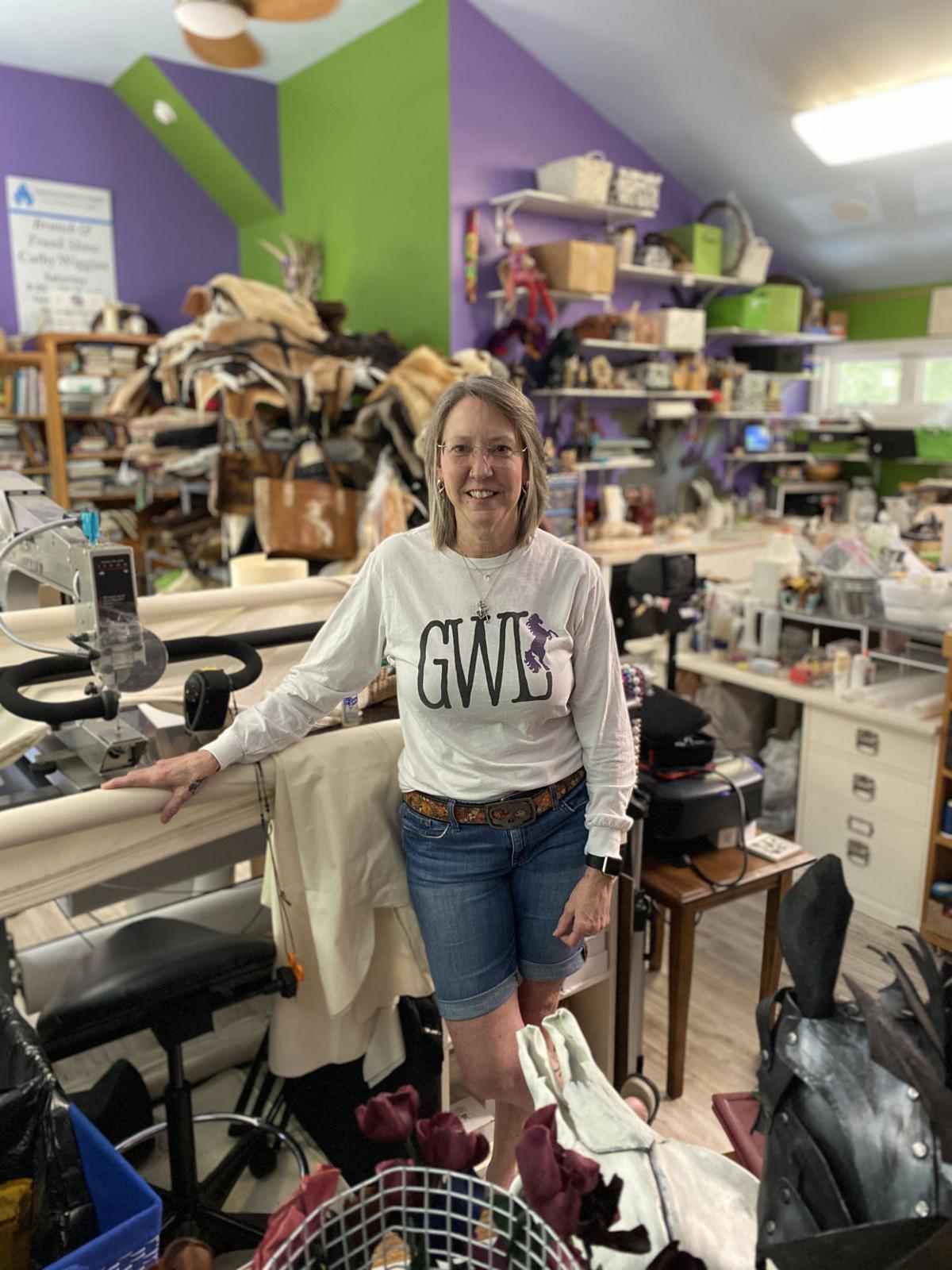 Cathy Wiggins leans on her long arm sewing machine in her studio at Lake Gaston. Wiggins uses this space to create leather crafts for her upcoming books, classes, and her own enjoyment. 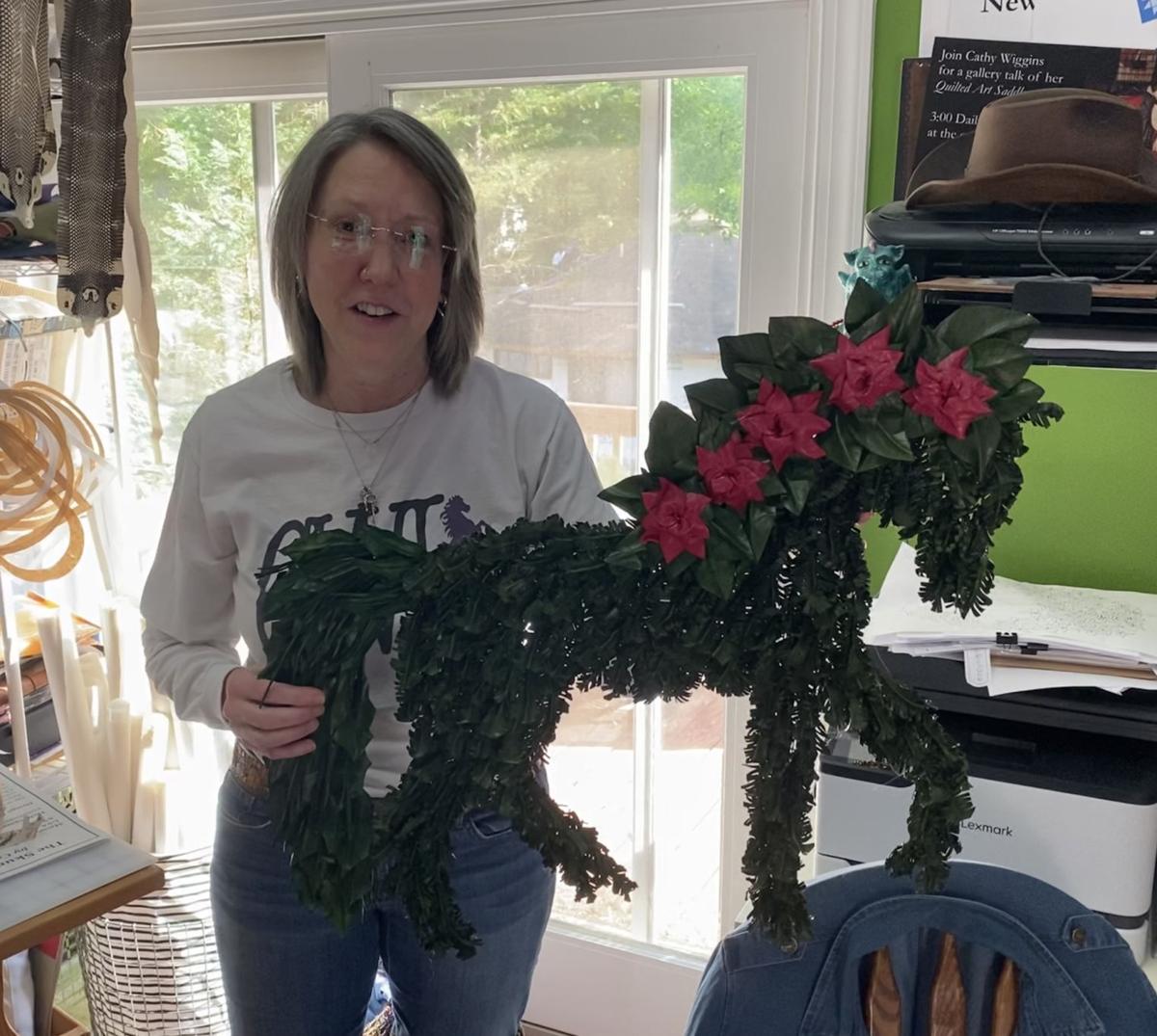 This horse figure was made using leather poinsettia flowers and leaves that she cut and dyed for the Christmas chapter of her new book. 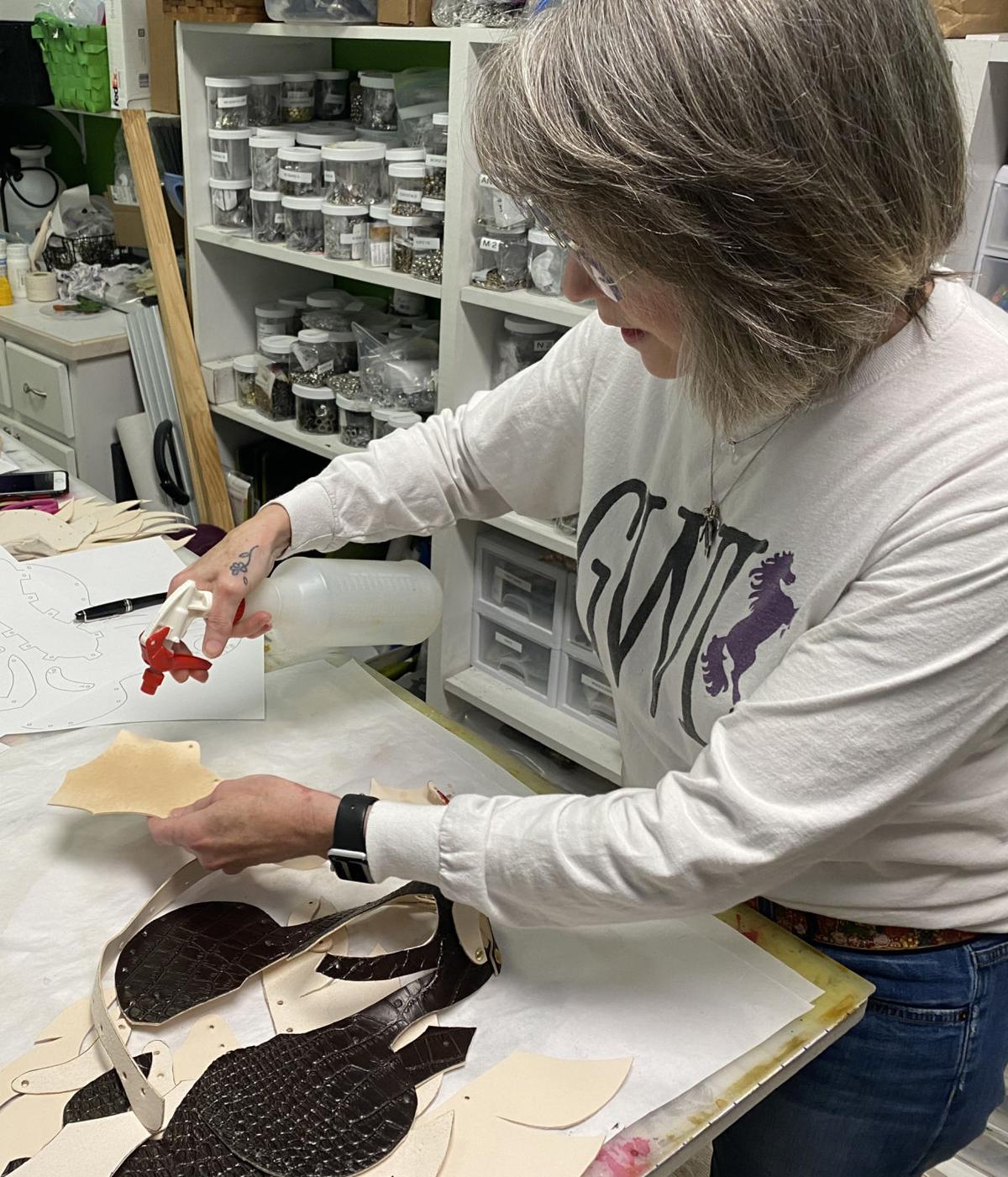 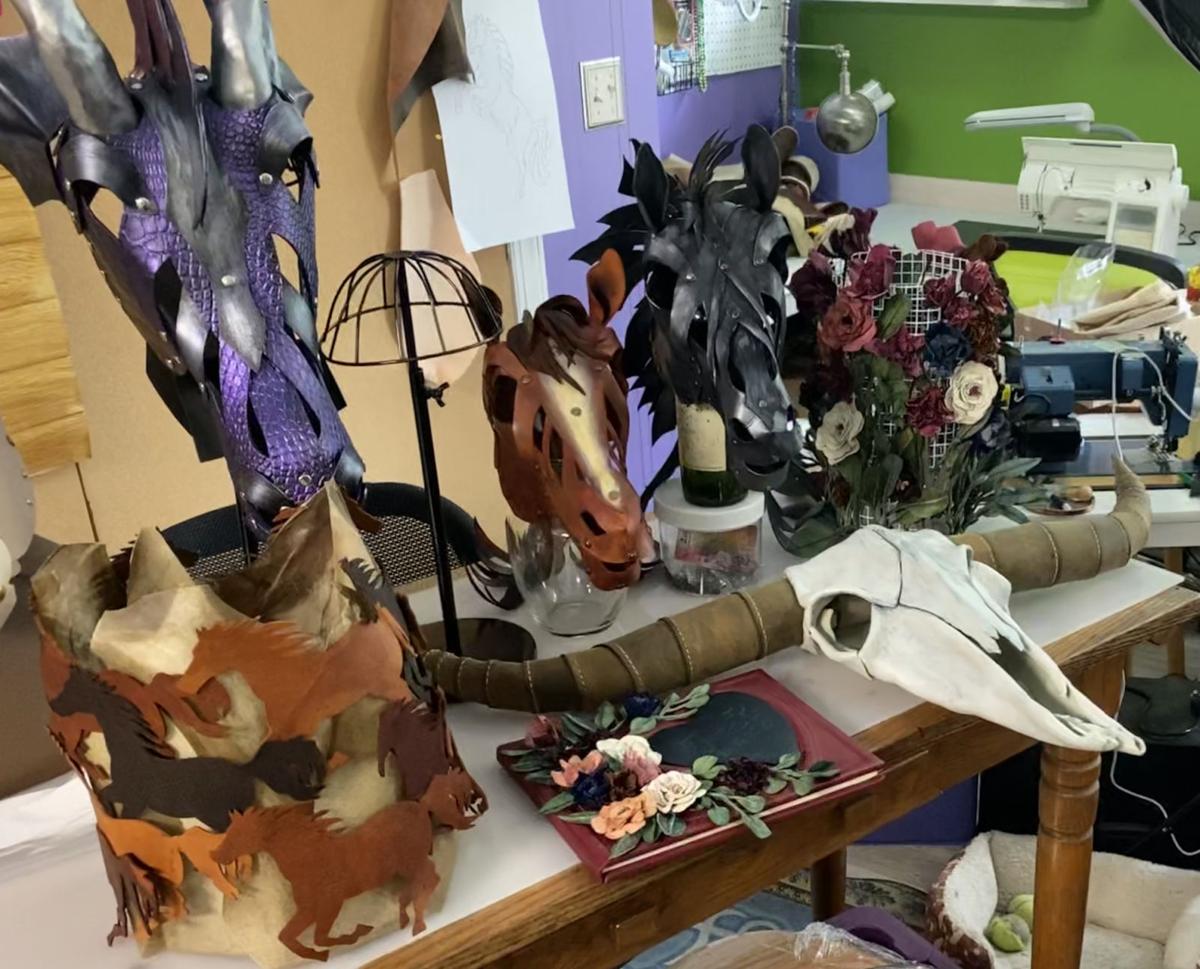 Some of the projects that Cathy Wiggins has displayed after a recent photo shoot in her studio include a dragon head scultpture that doubles as a mask, and a longhorn cow skull that looks real until examined up close.

Cathy Wiggins leans on her long arm sewing machine in her studio at Lake Gaston. Wiggins uses this space to create leather crafts for her upcoming books, classes, and her own enjoyment.

This horse figure was made using leather poinsettia flowers and leaves that she cut and dyed for the Christmas chapter of her new book.

Some of the projects that Cathy Wiggins has displayed after a recent photo shoot in her studio include a dragon head scultpture that doubles as a mask, and a longhorn cow skull that looks real until examined up close.

Walking into Cathy Wiggins’ studio, perched on the second floor of her garage, is like stumbling into an octopus’s garden. Projects, completed and in the works, are arranged on every table, the walls lined with shelves holding supplies, racks of leathers and furs, and miniatures of dragons, horses, and other figurines she brings back from her travels are weaved throughout the workspace.

“I’ve learned when people come into my studio for the first time, I have to just let them stand there and take it all in for a minute,” she said.

Wiggins is an internationally known and respected quilter and crafter, who has jumped out of the quilt and into three-dimensional form. Several years ago, she sent a shockwave through the industry by introducing leather into the world of competitive quilting. Her first award-winning leather quilt now hangs in the International Quilt Museum at the University of Nebraska. Wiggins is now working on her second book, a dive into leather home decor, while still taking the time to teach online leather-craft classes and produce videos to accompany kits available at her online store.

The first direction the eye is drawn to at her studio is to a giant machine called a long arm, that is stretched through the middle of the space. Wiggins said that it is unlike a regular sewing machine in that the fabric stays in place while the user moves the sewing machine instead, drawing on the fabric like using a pencil, moving the needle over the project.

“There are probably more long arms in quilters’ homes than what you would think,” she said.

Behind the long arm are umbrella and halo lights, with tables set up lined with finished projects. A cow skull with long horns stands out as looking unbelievably real until the leather grain jumps out at about one foot away.

“We make instructional videos to go with the kits we sell on the website,” Wiggins said. “We also shoot videos to run online classes for private Facebook groups. People participate from all over the world, sometimes classes of up to 75 people at a time.”

The first online instructional video Wiggins did had 68 people signed up.

“I had no idea that I would get anybody, but now everybody is going online for classes,” she said.

At the same time Wiggins is producing instructional videos, she is working through her second and third books.

“Right now I’m working on a chapter about Christmas,” she said.

One of her tables has several leather Christmas stockings. “The thing with the stockings is, you can customize them to match someone’s personality,” she said.

She is also working on leather ornaments, a reindeer made out of mistletoe, and about a dozen different tree skirts that are ready for dye.

Wiggins said she just finished a chapter about wedding decor inspired by a registry book she created for a family member.

“That was the sounding point for everything else,” she said. “I made a veil, a whole bunch of flowers, and a place setting including a menu and napkin holders. We wanted to go to a local bed and breakfast for this photo shoot, but we opted to do it outside instead, because of the virus.”

To play off of some of Wiggins’ earlier projects, she also did a chapter to reflect the decor of a den on a ranch.  That project included the cow skulls, horse head statues that doubled as masks, a set of horses for her own den, and table runners.

Wiggins’ first book, Quilted Leather, available on her website, is all about quilting with leather and how to work with dyes.

Her third book, also in the works, will be about cosplay, which is the practice of dressing up as a character from a movie, book, or video game. It will include chapters about making pirate, steampunk, knights in armor, and other costumes.

Her third book is scheduled to premier at the New York Comic Con next year, where her costume pieces will be exhibited.

“It’s a fine line. To be a successful teacher, I’m always teaching what I did two years ago,” she said. “Therefore, I have to balance what it is I’m showing students how to do something, while still leaving space to do new things. These books have allowed me to do more things and explore new ideas. I learned that I have to do what I want to do.”

Wiggins said that she doesn’t like doing the same thing five or six times, but to be able to make the steps clean and teachable, that is what’s necessary.

Wiggins now primarily works in leather. Her shelves that were once filled with fabrics are now loaded with studs, clasps, buckles, and grommets.

“My goal is to show people all the possibilities and that that you can do it at home, you don’t need all these special tools except for maybe some hole punches,” Wiggins said. “There are so many leatherworkers out there that make saddles and tooled belts; this is kind of bridging two worlds. The women that sew and the men that do the tooling, I am bringing them together to show more of what can be done.”

It started with one of her competition cotton quilts. She was working on a children’s puzzle series that included matching games and mazes. The last piece in the series was an “Oscar A Dragon’s Tail” book cover. Oscar was painted, and his story was quilted. Wiggins wanted the book binding to look like leather, and after talking to some friends about how to make cotton look like leather, she was inspired to just make it out of leather.

“That was the first thing I did. Once I did that, because I grew up with horses and I love leather, the whole world changed,” she said.

Her style pulls from three repeating genres, dragons like Oscar, western, and hippy.

“Those three things seem to hit all demographics, someone’s going to like one of them,” she said.

Her process, while making and deconstructing her creations, includes tracings and creating a numbered blueprint. She takes flat pieces of leather, cuts them to shape, sprays them with water and molds them into three-dimensional shapes; when they dry, they hold the shape.

The blueprints show where holes need to be punched for different styles of seams and which order the seams should be stitched or laced together.

Wiggins uses different kinds of leather for different projects. For quilting, she uses soft garment or upholstery grade leather. For molding she uses something called vegetable tan, which has all of the moisture removed, so when it is made wet and molded, it holds its shape. To make bags and bowls, she uses cowhide.

Recently, she received a water buffalo hide from a customer who wanted her to make him a gun case. She also produced several cross body bags, a tote and a weekend bag from that one hide.

“I have always crafted, but my background is in telecommunications. I wanted to major in art, but my mom said no, so I got a degree in software engineering,” she said. “I painted the whole time, mostly watercolor and acrylic. Dad taught me that if I see something in my mind, I can make it real out here for the world to see. I didn’t realize it was a philosophy for life.”

Wiggins moved to Lake Gaston in October of 2002. She purchased her first sewing machine to make curtains for her and her husband’s new house.

One of Wiggins’ neighbors brought her into the Lake Gaston Piecemakers Quilting Guild, and later took her to her first quilting show. There, she realized that a quilt wasn’t just for going on a bed and that it can be a work of art in and of itself.

“I always wanted to make the quilt that when you go to a craft show and you see 500 quilts, you remember mine,” she said. “How many flowers can you see, how many stars?  That’s when I started making the children’s series.”

“When I made the shift into leather, it was a real ego check. I was known for quilting and competing, and now I’m going to walk away from that and do something entirely new,” Wiggins said. “That’s why I think so many artists get stuck, they’re scared to take that leap of faith and go where their heart wants to take them.  Because I was established enough already, people wanted to see what I would do. I was always pushing the envelope anyways. When I moved into leather, people came with me.”

“What I found fascinating, because leatherworking is historically more of a men’s craft, they are so much more open and willing to help, where women are more secretive and competitive,” she said.

Where to find her

Wiggins travels around the country for craft and quilting shows, but sticks to the bigger names in the circuit. Locally she can be found at the Farmers Christmas show in Warrenton. Her next closest show is in Hampton, Va.

For more information about Wiggins, to see her creations, and to get a jump into leather crafting, visit her online store at gypsywoodleathers.com.

Receive our newspaper electronically with the e-Edition email.

We'll send breaking news and news alerts to you as they happen!