Pictured is the completed mural at the Haliwa-Saponi Tribe’s multipurpose building on Capps Farm Road near Hollister. 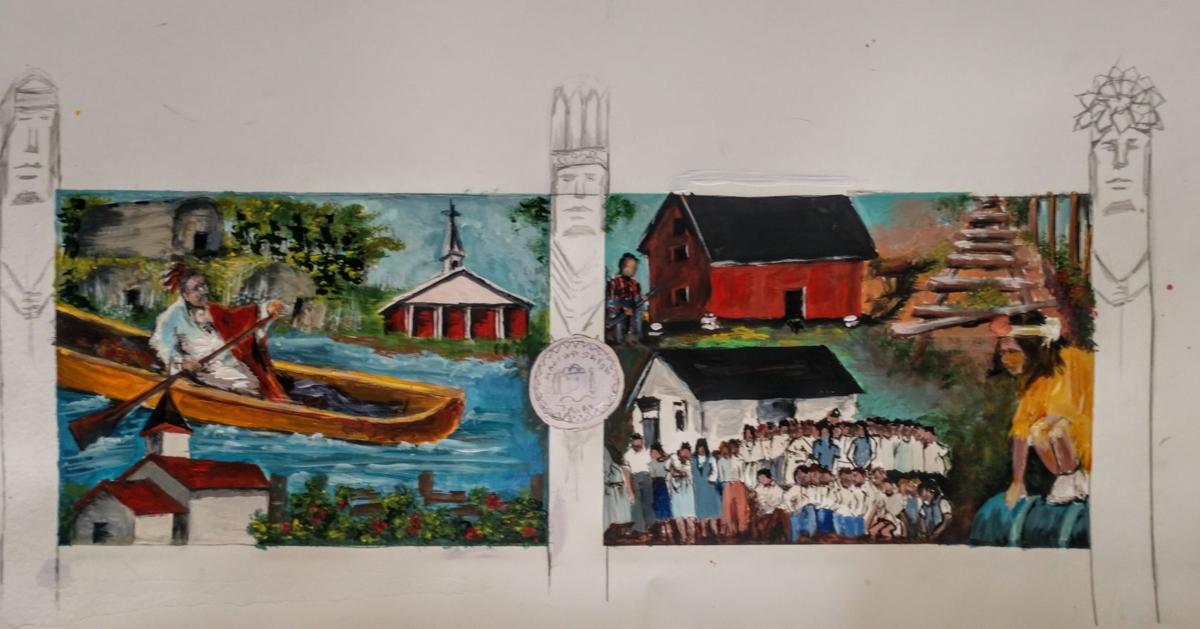 The above image shows a representation of a portion of a mural which will be placed at the site of the Haliwa-Saponi Tribe’s former council building. Sketched are depictions of sculptures which will accompany the artwork.

Pictured is the completed mural at the Haliwa-Saponi Tribe’s multipurpose building on Capps Farm Road near Hollister.

The above image shows a representation of a portion of a mural which will be placed at the site of the Haliwa-Saponi Tribe’s former council building. Sketched are depictions of sculptures which will accompany the artwork.

Work on two murals in the Hollister community continues with the completion of designs for a mural project at the site of the Haliwa-Saponi Tribe’s former council building on Highway 561 in Halifax County, N.C.

The second phase of the project, along with a now-completed mural on the tribe’s multipurpose building on Capps Farm Road, were made possible through a grant from the Z. Smith Reynolds Foundation of North Carolina through the Inclusive Public Art Program. Working to obtain the grant were Dr. Marvin “Marty” Richardson, director of the Haliwa-Saponi Legacy Project, and Matthew Richardson, the tribe’s public arts initiative coordinator. Both murals will be accompanied by sculptures.

The mural at the former council building will incorporate a series of panels providing a visual summary of the Haliwa-Saponi Tribe’s long, rich history. Accompanying the mural will be six wooden sculptures carved by woodworker Phillip Harley, which will represent the tribes from which the Haliwa-Saponi are descended: the Tuscarora, Nansemond and Saponi. A wall will be constructed at the site as a physical canvas for the mural.

Matthew Richardson explained that the first in the series of panels which will make up the mural will depict a man traveling by canoe along the Roanoke River, “symbolizing the journey of the Haliwa-Saponi throughout time as both the landscape and society change around them.”

The focal point of the man will be surrounded by images depicting cornerstone achievements and landmarks of the Haliwa-Saponi community, including Mt. Bethel Indian Baptist Church, Haliwa Indian School and B.B. Richardson’s packhouse. Richardson explained that the locations selected for the mural are significant for their historical depiction of tribal sovereignty and community.

On the same side of the wall, a second panel will further depict historical sites in the community, along with youth participating in cultural activities and moving up a level in their education. Richardson said that these images symbolize efforts to educate tribal youth both in school and in helping them to develop personal identity.

The second panel also includes images of grapes representing what is now Medoc Mountain State Park and once was the proposed site of a vineyard, and the railroad. However, Richardson noted, profits raised through industries made possible through the development of the railroad did not benefit the original inhabitants of the land. Therefore, the two symbols represent restrictions on Haliwa-Saponi lands.

Mural panels on the other side of the wall will incorporate more contemporary images while continuing the account of the area’s history. Prominent in the first panel is the drum, known as the heartbeat of Mother Earth, and “Grandfather.”

“(It) is not traditional to the Haliwa-Saponi Indian community, but has blessed us with the gift of music used to reawaken our language, maintain culture and foster connections throughout Indian Country,” Richardson said.

The panel also includes a representation of a more somber part of recent community history, the family of Faith Hedgepeth mourning her death, which is being investigated as a homicide.

The second panel on that side of the wall includes the image of fire representing the spirit of the Haliwa-Saponi people and their passion for the tribal community to thrive. Accompanying images reflect both frustrations and hopes as the Haliwa-Saponi people look toward the future. Richardson said that a straw broom represents not only local history, but also the idea of issues facing a rural tribal community being swept under the rug in favor of meeting needs of wealthier communities.

Final images depict a high school graduate in cap and gown, continuing the circle of educating youth to prepare them for carrying the tribe into the future, Richardson said.

With the development of these mural plans, the mural at the multipurpose building has been completed. Philip Harley is working on sculptures which will accompany the artwork.

Richardson explained that the mural reflects the multipurpose building’s role as site for programs and events that provide educational, emotional, cultural and social enrichment, as well as healing through culture, art and conversation.

The mural depicts native plans that provide natural medicines and paw prints that represent characteristics valued in all Haliwa-Saponi citizens.