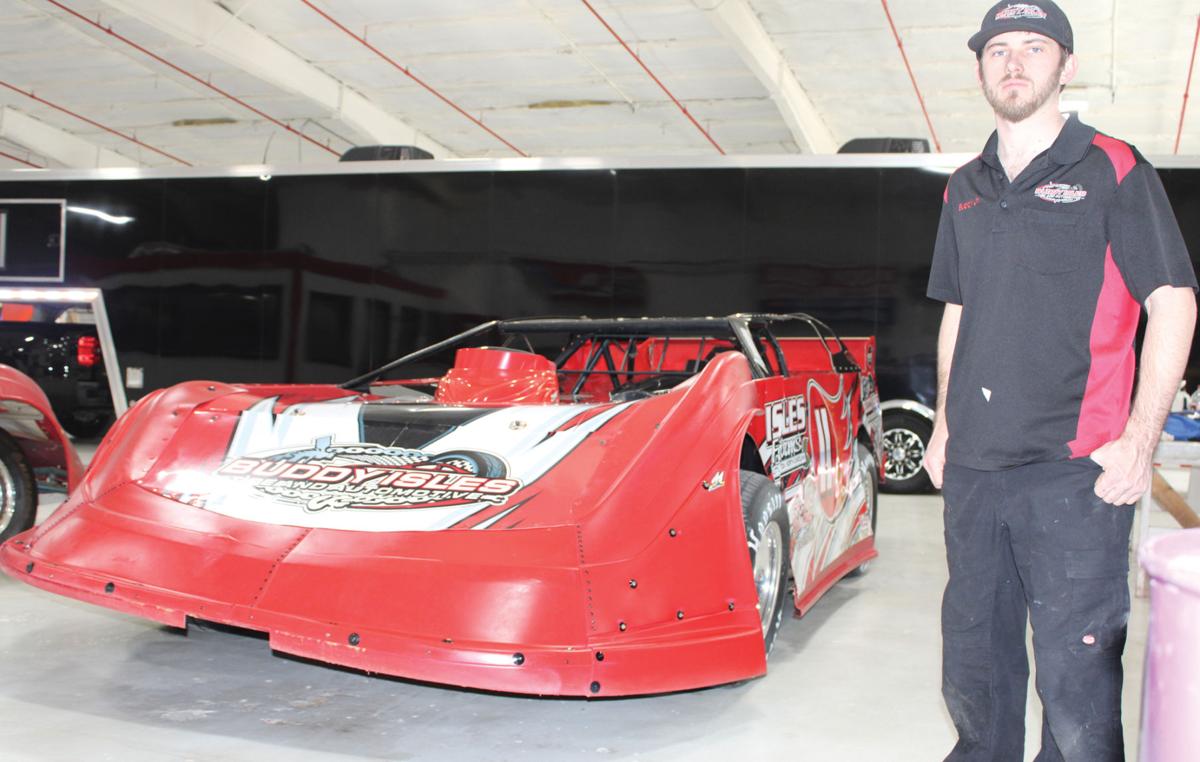 Buddy Isles, Jr. stands next to his late model race car before loading it up for the Gateway Dirt Nationals in St. Louis, Mo. Isles competed as one of 85 drivers in his division, qualifying for his first heat in the top 15. 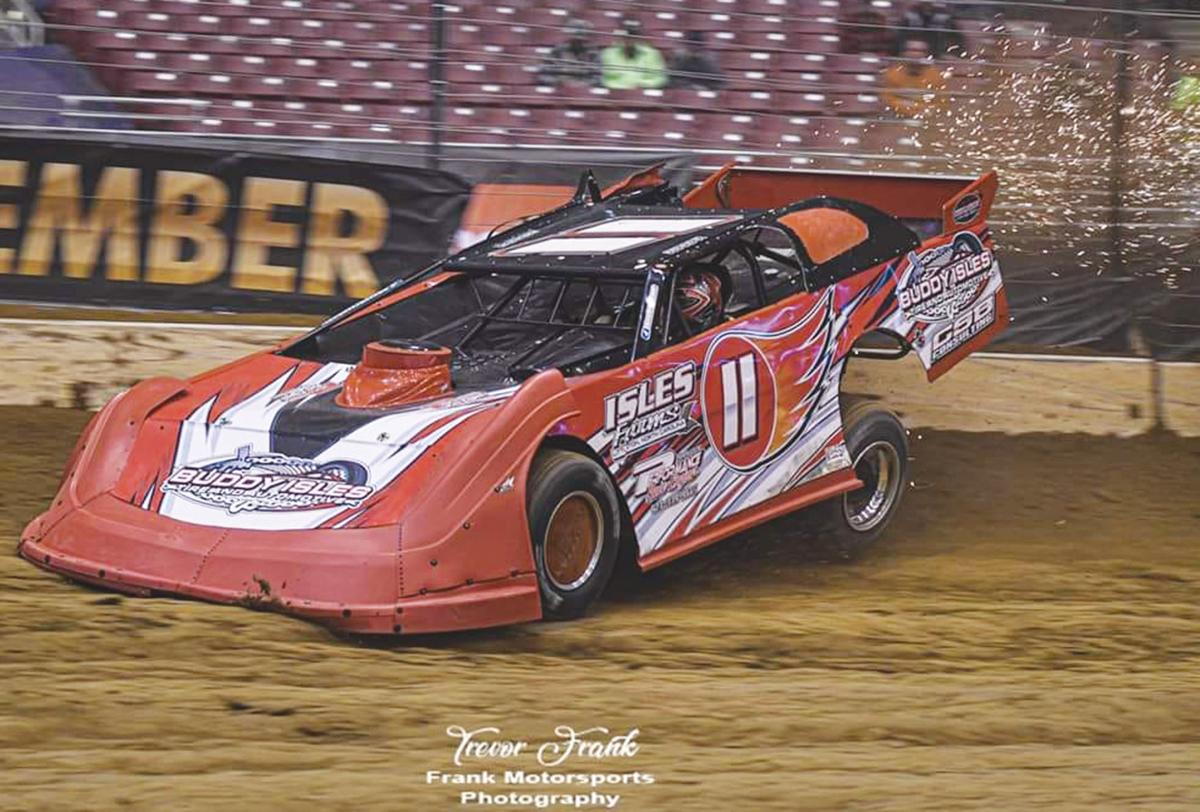 Buddy Isles leaves a little paint and makes sparks fly around a turn at the Gateway Dirt Nationals in St. Louis, Mo. the weekend before Christmas

Buddy Isles, Jr. stands next to his late model race car before loading it up for the Gateway Dirt Nationals in St. Louis, Mo. Isles competed as one of 85 drivers in his division, qualifying for his first heat in the top 15.

Buddy Isles leaves a little paint and makes sparks fly around a turn at the Gateway Dirt Nationals in St. Louis, Mo. the weekend before Christmas

Buddy Isles, Jr. of Littleton, N.C. made his way to The Dome at America’s Center in St. Louis, Mo., for the 2019 Gateway Dirt Nationals to race his late model car the weekend before Christmas.

In preparation, Isles got a new used motor with more horsepower for his late model car, a truck, and a custom fitted trailer to pull everything to Missouri. With his team of mechanics, friends, and family, the group set out on Dec. 17.

After his first night of practicing, Isles was placed in the top 30 of the 85 cars in his class. Isles then qualified in the top 15.

In the first heat, Isles got out front in the first lap and held the position for a couple of laps until he hit a pothole, which threw him into third. He regained second place before he hit a rut that sent him headfirst into a wall. When he hit the wall, the car turned over, tearing it to pieces.

His team worked to get the car back to being race ready, but the frame was twisted and the body needed to be reclipped.

Isles’ lap time placed him in the top four cars of the initial 85, despite his crash. Isles said he was averaging around 70 miles per hour, which is slower than bigger tracks, but fast to be around 19 other cars.

“The track was rough and small, which is good because it’s an equalizer to the big name drivers competing. It makes the race not about the big dollars in the equipment, but about the driver,” Isles said.

Racing in St. Louis is a big deal because according to Isles, “It pays a lot to win, and the races have some of the best and biggest name racers from all over the country. It’s a big race because it’s inside, and it’s one of the only races they hold in a dome.”

Isles also said that there were over 30,000 fans, TV crews, photographers, and fireworks. “Everyone treats you like you’re big time, like it’s NASCAR,” he said.

Isles said that he thought some of the competition was going to be a lot harder and that he was surprised to get into the top 10.

Self-sponsored. Isles hopes he caught some attention in St. Louis. He plans to try to market to some sponsors this year, now that he proved he can run up front and that he is strong every time he goes out.

“My dad was always into racing,” Isles said. “I always wanted to get into it, but it wasn’t until I was 15 that we built my first car.”

He started racing in the pure stock V8 class and won the third race he competed in. He won two races his first year.

In 2006 and 2007, Isles competed at a lot of races at Southern National in Kenly, County Line in Elm City, Fayetteville Motor Speedway, Kings Speedway in Henderson, and Dublin Motor Speedway in Elizabethtown, winning over 70 races between those years. He has also raced in Tennessee, Ohio, Virginia, and Georgia.

After high school, Isles raced off and on until he went to a “NASCAR-type school to build race cars,” he said.

Isles helped run his family automotive shop between 2010 and 2014 until he had the opportunity to go to Ohio and work at ThorSport Racing on Matt Crafton’s NASCAR Truck Series team. He worked as a fabricator for about a year, but really did everything in the shop to build the race trucks.

“I was even on the road with Crafton,” said Isles.

He came back to Littleton in 2016 when an opportunity came up to create the shop that he runs now.

In 2017, they built the new shop, and Isles took some time to focus on the business and spent less time on the track.

Isles started racing again in 2018, and this past year qualified 11th at a race in Charlotte N.C.

Also last year, Isles raced in Brinkleyville and at Halifax County Motor Speedway before getting ready to go to St. Louis, an opportunity he has wanted to take for a long time.

In 2020, Isles plans to get his car fixed first. He ordered a new car and needs to get it finished, too. He has been running limited late models and in the new year, he plans to run mostly super races, which means his car will have more than 800 horsepower.

Isles also wants to travel more for racing. He wants to go to Florida and said he will definitely go back to Charlotte, N.C., out to Tennessee, and hopefully back to St. Louis.