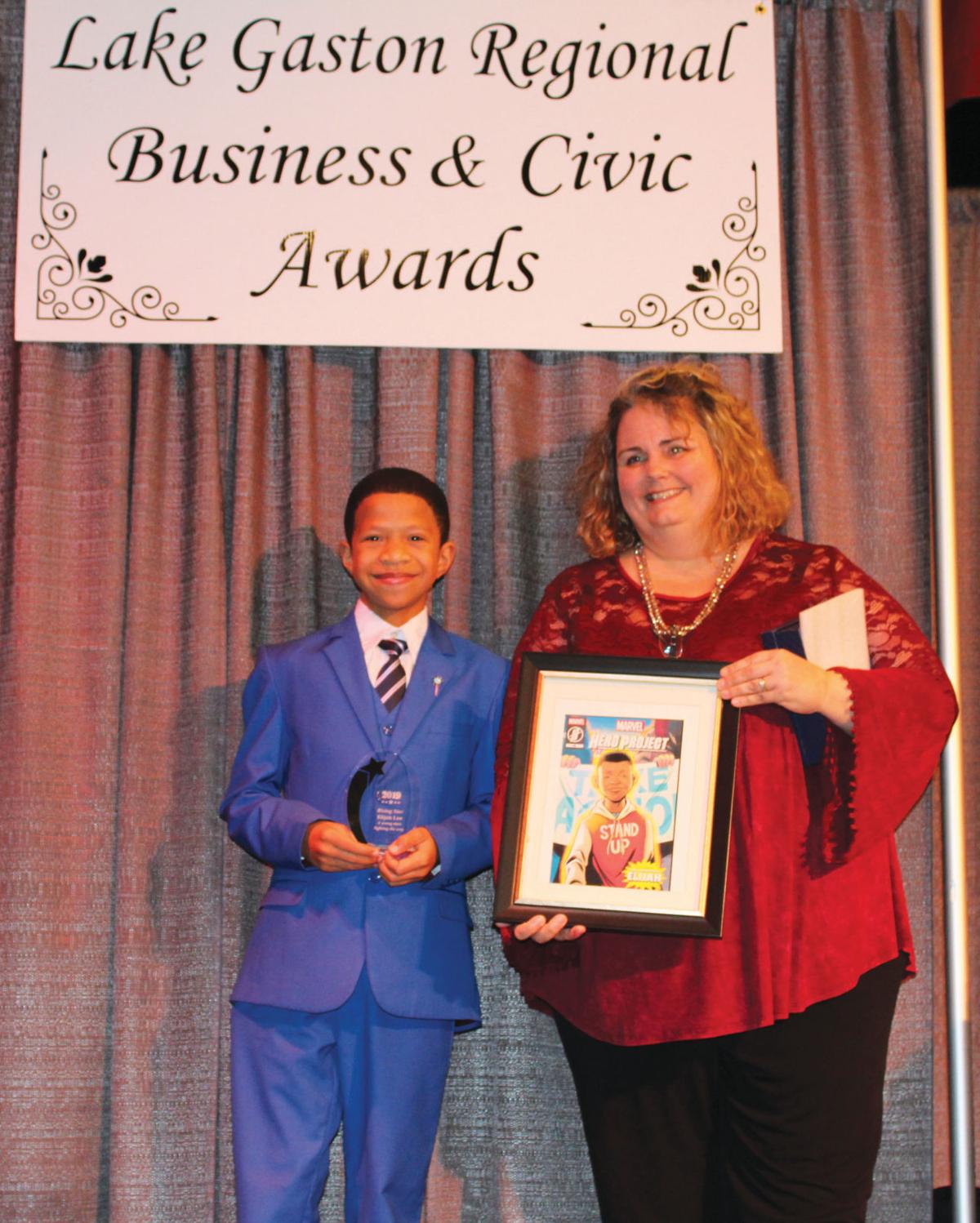 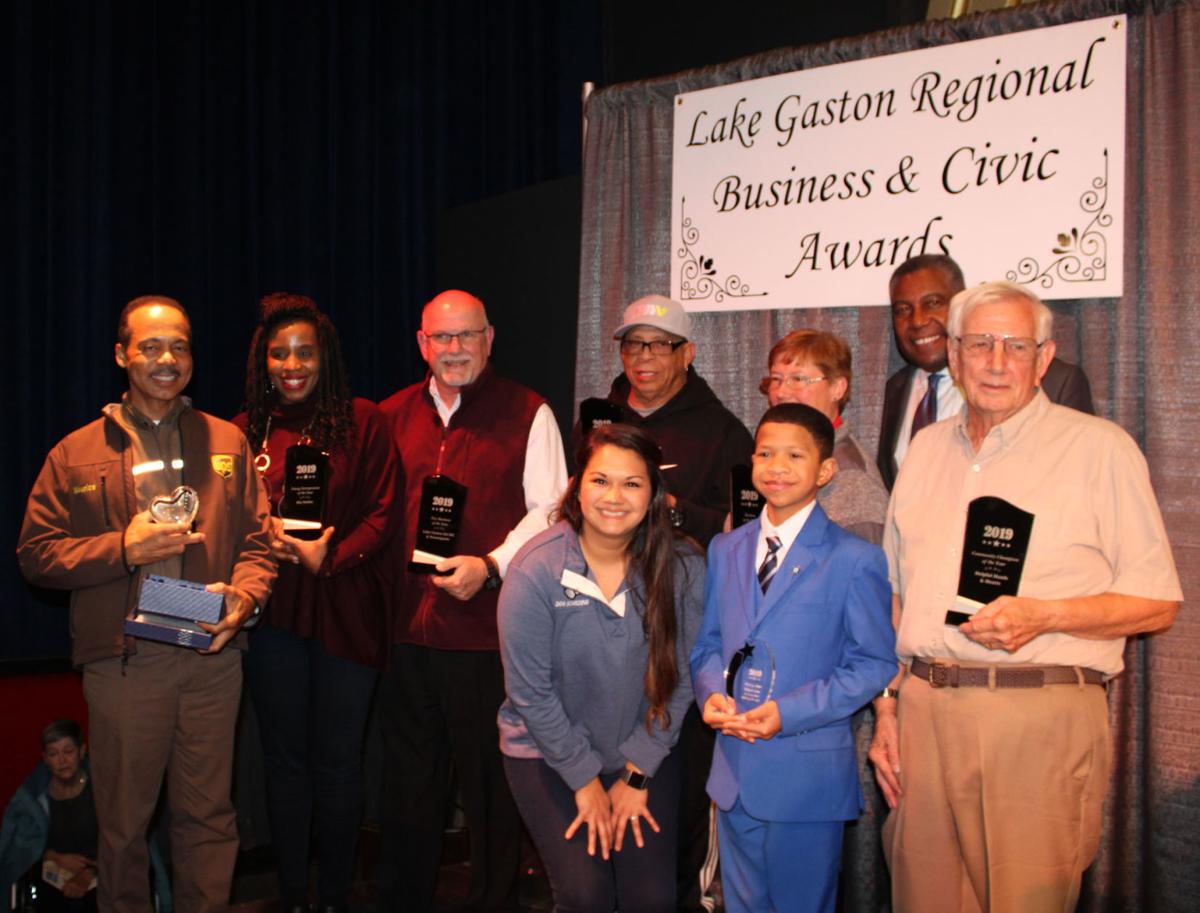 The Lake Gaston Regional Chamber of Commerce hosted its Annual Meeting last Thursday for its members at the Lakeland Cultural Arts Center.

The event led with a social and silent auction, followed by dinner by Chef Coop of The Pointe, before the keynote speaker, Commissioner Larry B. Perkins, took the stage.

Perkins is the vice president and assistant general manager of PNC Arena and the Carolina Hurricanes, and owner of the Collective Center in Enfield. His presentation was titled “A Destiny of Will.”

Perkins told the crowd about his experience leaving Enfield, attending school in New York, becoming a private investigator and vice president of the Meadowlands Sports Complex in New Jersey. He told stories about meeting popes, presidents, famous athletes, and pop stars. He concluded his speech by talking about saving his money to buy a bus ticket to New York and running away at age 16.

Perkins found his mom by an address on the last letter she sent him. It had been seven years since he had seen her; after finding her, he quickly realized why.

His message was to be kind because everyone is going through something else that might not be seen. He talked about his path and where he went, and right or wrong, a person’s path leads to someplace. His final message was to thank someone who has been in made a difference in one’s life.

She presented Marcus Willis of Henrico the 2019 Volunteer of the Year. Willis, who will celebrate his 70th birthday on Feb. 9, returned to the area after he retired from the U.S. Department of Agriculture and quickly became engaged in the community. He is president of the Lake Gaston Senior Citizens Club and the building manager and assistant secretary of the Lake Gaston Community Center. He is also vice president of the Friday Mornings Swingers Bowling League at The Club.

“He is a wonderful example of how retirement years are some of the best years of our lives, especially when it includes sharing some of your time with others,” Wells said.

Wells highlighted that the organization identifies the needs and coordinates services that could include transportation, minor home repair, and home visitation. Wells mentioned that the group has built 151 handicapped accessible ramps over the last three and a half years.

Kia Settles was named the 2019 Young Entrepreneur of the Year for her online store and brick and mortar Best Kept Secret in Littleton.

Lake Gaston Jet Ski and Powersports was named 2019 New Business of the Year because of their expansions into more products, services, and staff, which led to their move to Lizard Creek Road.

Since their move, Lake Gaston Jet Ski and Powersports has added ATVs, UTVs, and now a line of clothing from Moon Street USA.

Lake Gaston Dog Boarding also sponsors many fundraisers and produces a calendar every year and donates the proceeds to a local nonprofit. This year’s total donation was over $1,200.

Wells also issued two special presentations. Elijah Lee from Roanoke Rapids was named the 2019 Rising Star. Lee is a 12-year-old activist and advocate for children, raising awareness for child abuse prevention. He serves as a public speaker for Guardian ad Litem statewide conferences, foster care events, and faith communities across North Carolina. He was awarded the Youth Impact award from Halifax Community College, the Youth Civics Award from Northampton County branch of the NAACP, and has been designated a Marvel Hero. He was recently featured on Marvels Hero Project on Disney+.

The other special award was the 2019 Heart of Lake Gaston, given to Maurice Lynch. Wells was prepared with quotes from local business owners about Lynch, who is the local UPS driver.

One of the quotes from Scott Watson: “Maurice is the man! Always happy and a smiling face that we look forward to seeing. I know that we at Coldwell Banker Advantage feel blessed that he is the driver for our area. We wouldn’t have it any other way.”

Another from Susan Bersch: “Maurice sometimes delivers work stuff and sometimes fun stuff, but it’s always a pleasure to see him because he also brings a great smile that brightens everyone’s day.”

Wells also gave Bill and Terryn Owens, the creators of the Big Splash Raffle, the Big Splash award. Wells credits B. Owens for convincing her to take her job as president of the Lake Gaston Regional Chamber of Commerce. She said that when they met at The Pointe for the first time, she told Owens, “If you don’t want change, or someone who is going to move things as you set them down, then I’m not your girl.”

Owens said that he wanted change, and Wells mentioned that she didn’t think he knew what he was getting into by hiring her.

The Chamber hosts this annual event to recognize the businesses and community members working to make an impact in the Lake Gaston area. For more information about the Chamber, call 252-586-5711.