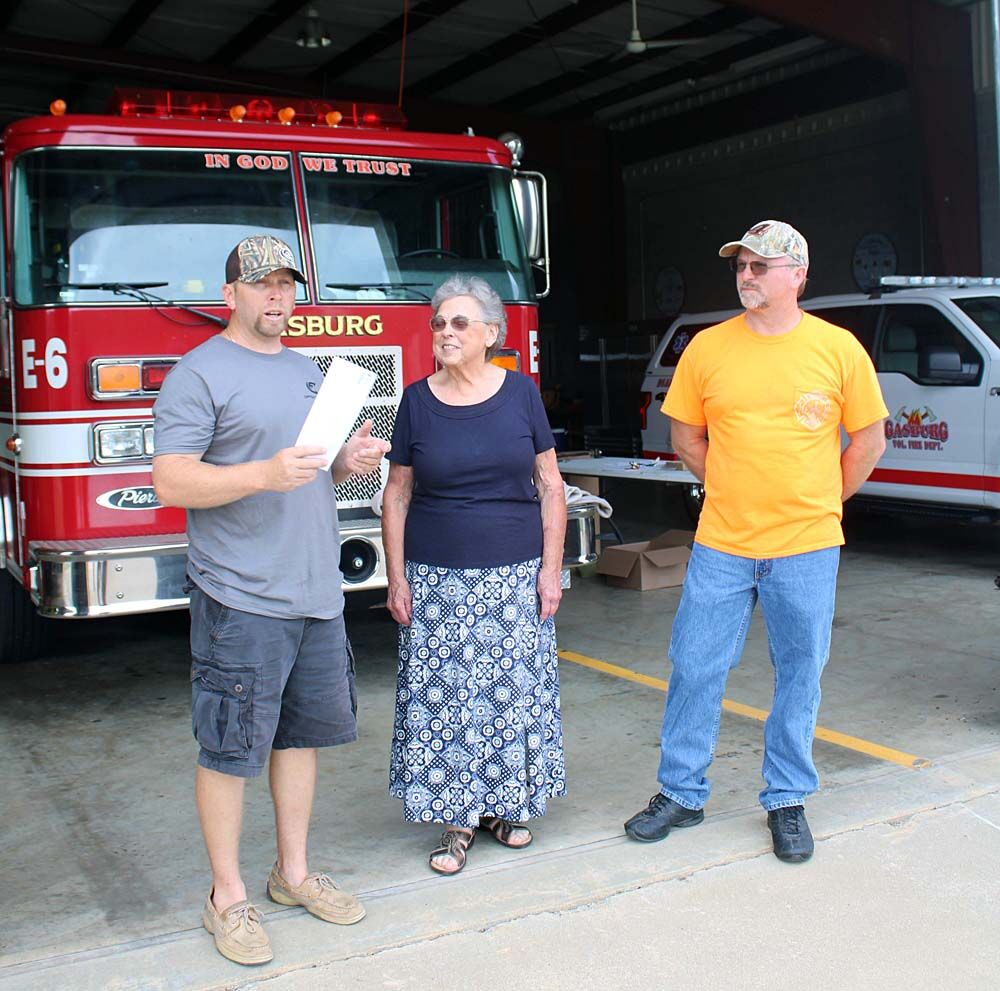 Joey Baird discusses his donation to Gasburg, Va. VFD with Catch the Fever out of Roxboro, N.C. as Brenda Child and Gasburg VFD Chief Ricky Woodard look on. 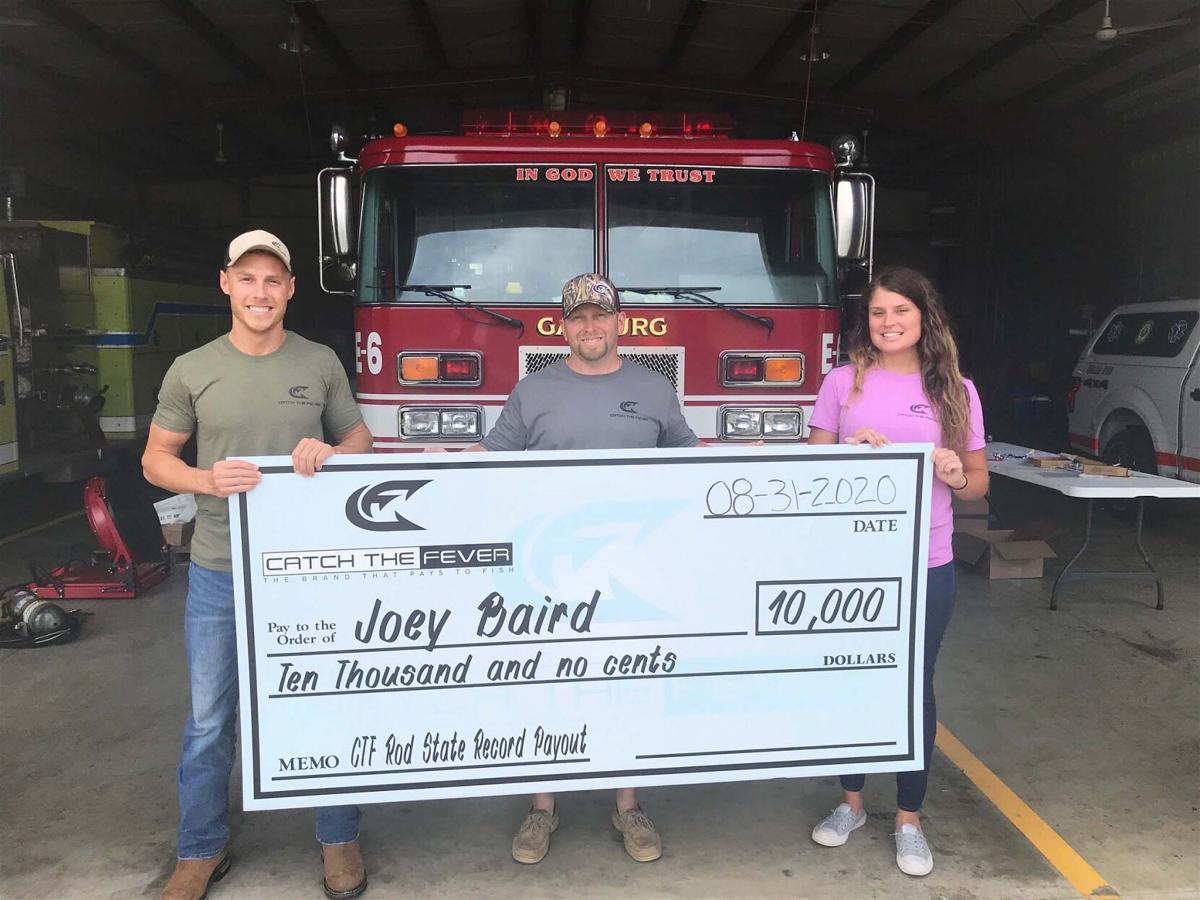 Kaleb Page and Ashleigh Warren of Catch the Fever present Joey Baird (center) with a check for his North Carolina-record catfish, caught in July on Lake Gaston.

Joey Baird discusses his donation to Gasburg, Va. VFD with Catch the Fever out of Roxboro, N.C. as Brenda Child and Gasburg VFD Chief Ricky Woodard look on.

Kaleb Page and Ashleigh Warren of Catch the Fever present Joey Baird (center) with a check for his North Carolina-record catfish, caught in July on Lake Gaston.

To understand the significance of Joey Baird’s $10,000 donation to the Gasburg, Va. Volunteer Fire Department, the story of Brenda Child’s rescue on Oct. 13, 2018 during Hurricane Michael must first be recounted.

Baird, a Brunswick County native, on Thursday was presented with a check from Catch the Fever of Roxboro, N.C. for the North Carolina state-record blue catfish (121 pounds, 9 ounces) he caught on Lake Gaston in July. Baird caught the fish with a Big Cat Fever rod from Catch the Fever, which offers payouts for state-record fish that meet its stipulations.

Baird on Thursday then turned the prize money directly over to Gasburg VFD, of which he is a member, to put towards a rescue boat.

Catch the Fever initially reported the news of Baird’s intended donation, as well as part of the story behind it, in a video that has since been viewed 184,000 times on Facebook.

As much as the money going towards the boat is important, so is the reason why lake communities like Gasburg need emergency personnel equipped with appropriate watercraft for rescues.

Ask Brodnax’s Child, who was on hand Thursday with her husband Doug to witness the check presentation.

“It really meant a tremendous amount to me,” Child said. “I know Joey’s heart is very, very generous. I wasn’t surprised when he told me what he did but it really meant a lot to know that somebody else would not be left in this situation that I was left in.”

Child, a Weldon, N.C. native who has spent most of her life in Virginia, ended up trapped in her car between Brodnax and Lawrenceville as Hurricane Michael floodwaters from the Meherrin River enveloped the vehicle.

“I couldn’t open the doors,” Child said. “I couldn’t do anything. The car just started flooding and I started praying. I have great faith in my Lord.”

Child’s cell phone hadn’t been working recently, but it did that day and she connected with a dispatcher, pleading for them to send Baird, who the Childs already had a relationship with before the incident.

As the water rose in the car, Child was pushed to the backseat as the water became life threatening.

Still on the line with the dispatcher, Child asked, “Is there anyone coming? The water is up to my neck. I need to get out pretty quick.”

Child soon heard the voice of Baird, who swam out to the front of the car to help, hanging on to a tree.

A few other first responders from the South Hill area used a personal pontoon boat to reach the vehicle before breaking the back window and pulling Child out.

After supplying her with a life jacket, Baird then grabbed Child and leaped with her to a jet-powered boat that arrived from two counties over via state wildlife conservation officers. Child’s momentum knocked Baird over, but she was safe after about an hour of danger.

“Time is of the essence when you get a rescue call like that,” Baird said. “Seconds, minutes mean somebody’s life.”

“I believe that the Lord really blesses a person when they do things to help others,” Child said, “with a pure heart like Joey has.”

Life certainly seems to have positively accelerated for Baird since the rescue.

His Deerfield Fence Company business has taken off and catching that massive state record fish has brought new exposure to Bait & Wait Outdoors, a multimedia venture Baird is involved with that spotlights fishing and hunting via Facebook and Youtube. He and longtime pal Joey Lopresti, who was also on hand Thursday for the ceremony, are the hunting experts of the group, particularly with turkeys.

Despite the new ventures, Child’s rescue won't be far from Baird’s mind. A certified EMT-B and former paid firefighter, he’s a police officer now in Brodnax in addition to aiding with fire and EMS calls there when he is on duty.

Gasburg VFD Chief Ricky Woodard said he hopes to have a boat in the fleet by next summer.

“We’ve got to get a committee together to figure out exactly what our needs are,” Woodard said, “what type of boat we want and try to get the most for the money we can get.”

Baird doesn’t want to preach about what happened; he just wants to avoid a similar situation. And as far as paying his prize winnings forward, he just had a feeling it was the right decision.

“In my heart I felt like it was the right thing to do,” Baird said. “The good Lord says you give and you shall receive.”